Turbo, one of our two cats, has recently picked up the noxious habit of peeing on the couch. Fortunately it is a leather couch, so at least it’s easy to clean up. 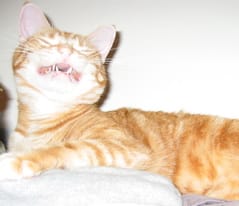 Nevertheless, it’s disturbing she’s all of a sudden picked up this delinquent behavior.

The collective wisdom of the Internet seems to suggest she may be having a urinary tract infection, have developed feline diabetes, or may be acting out due to stress. None of these sound like good news. To add to the confusion, her urine doesn’t smell, which certainly doesn’t seem right either.

Prior to the errant urinating, she was walking around limping on one of her front paws for a few days, which may be somehow related and suggests that perhaps it is indeed a urinary tract infection.

Before anybody starts lambasting me for not rushing her to the vet as soon as she developed the limp (which has now gone away on its own): I don’t take me to the doctor for a limp, so the cat sure isn’t going either. End of story.

We’re monitoring the situation now, and if she hasn’t stopped peeing in forbidden places at the end of the week, it’s off to see the vet.