Think you’re having a bad day?

Ran across this image on the web site of Swedish newspaper Aftonbladet, and since it makes me cringe, it must be worth sharing. 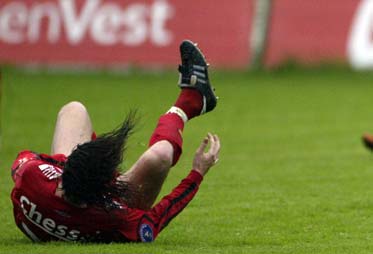 And yes, soccer is statistically speaking one of the most dangerous sports to play.

Here’s a translation of the article’s lede:

Fabijan Cipot, 28, hoped to play his way to a contract with Norwegian [soccer] club Brann.

Instead, his career may be over after a dirty tackle during a friendship game against Birmingham.

« I, for one, welcome our creepy fish overlords

The dawn of deception »