Some notes on cold weather

We had a category two blizzard warning yesterday, but the storm petered out a bit before it got to us, so it ended up being not much more than heavy snow and some winds. Nevertheless, traffic chaos ensued.

Since it’s been ten years since I spent time in a real winter, it’s been pretty trippy to reacquaint myself with the happy fun time that is driving on frozen roads.

I’ve started to nurture a new theory that the reason most people in Sweden don’t have more than two kids is the insane amount of time you spend getting the wee ones in and out of cold weather clothes. Stockings, extra sweater, extra pair of socks, snow pants, jacket, hat, mittens … sheesh. And when the little ones decide that putting all that clothing is not an activity that should receive their cooperation, and you’re already running late for wherever you’re going, well … patience can get a bit frayed.

But it’s totally worth it for the look on Andrea’s face when she’s playing in the snow. 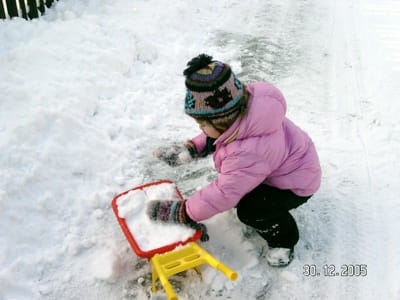