Please allow me to introduce the newest family member at Casa Core Dump: 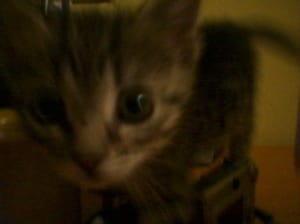 Isis the Cat. Click to enlarge (a little bit)

Isis is a little kitten we adopted from the vet on Monday night. She’s just started eating solid foods and her fur is still wooly. The name Isis is actually still in beta—I like it, but the wife unit is not so sure. We’ll see what happens.

Here’s another picture for scale: 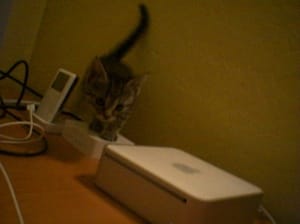 On a power supply. Click to enlarge (a little bit)

Yes, the picture quality is horrid. After some frustration, I realized that the only way to get decent pictures of a little being that will not be still for a fraction of a second is to video tape it and use screen grabs. So the pictures are coming at you straight outta the iSight.

We mostly adopted her for the sake of Shiva, our existing cat, who has been suffering more and more from cabin fever after Turbo passed away. Shiva, of course, doesn’t have a maternal bone in her body, and has been celebrating the arrival of another feline in the house with hissing and hiding in a closet. Sigh. It’s slim hope, but maybe she’ll come to her senses at some point. If nothing else, Isis will no doubt be able to kick her butt when she gets older—big paws on this kitten.

« Pain in the neck