Out of Sweden today comes the story (sorry, article is in Swedish) of what may be the most inept bank robber in history.

Apparently, the would-be robber—who “appeared to be under the influence of drugs”—entered a bank holding a banana-shaped knife and wearing a purple child’s T-shirt as a mask: 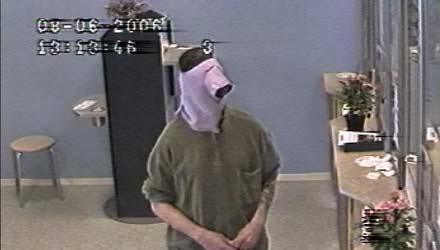 Bank staff then laughed at him until he left the building.

Continuing the criminal mastermind theme, our hero removed the child’s T-shirt as he left, allowing one of the staff to get a look at his face. The staff member realized that she had seen him on the subway earlier that day, the police found his picture in surveillance footage from the subway, and he was picked up later the same day.

« A special day
Review: The World Is Flat »