One of our cats gets an enema. I feel her pain.

We got home yesterday ready for a relaxing Friday evening and a weekend of nothing much planned. To find that one of the cats had peed and pooped in our bathroom and in the newspaper basket. After a while we figured out that Isis was the culprit, but why would she do such a thing?

The cat litter box is always kept reasonably clean, so it shouldn’t be some kind of protest about that, we figured. But hey, sometimes weirdness happens, so we decided to wait for a re-occurrence. Which happened this morning.

My fear was that she had developed feline diabetes and would have to be put down just like Turbo, which would suck. But as she was having bowel movements as well, that didn’t seem likely. Hopefully.

So they gave her an enema. 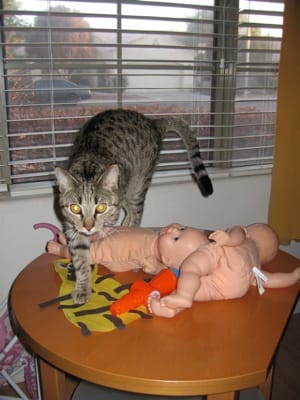 I just had an enema. How’s your day going?
Click for larger version.

But wait, it gets better.

The idea is that the enema will have flushed her out, and the stoppage will break down into, ehm, manageable pieces. But it might not. In which case she might strain so hard she breaks her rectum. That’s right.

If this happens, we’ll notice it since a piece of pink tissue will stick out from her behind. And it’s a very, very bad thing, so we’ll have to take her to the pet hospital immediately.

So while you’re going about your weekend business doing whatever it is you do, I’ll be watching my cat’s behind.