Men tend to overcomplicate things, including grilling. Nic breaks down how to do it right.

One thing us men excel at is over-complicating things. Look at any male-dominated field and you’ll find a morass of acronyms, shibboleths, and over-engineering of things that should be simple. Audiophiles and computer geeks make excellent examples. If it’s not impenetrable to outsiders and outrageously expensive, it’s Not Manly. 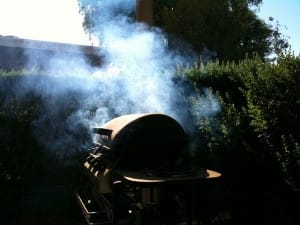 This tendency of course afflicts that last sacred outpost of the suburban male: The grill.

I don’t know if it’s because of almost all men having grown up listening to endless debates about the Correct Way to Char between more-or-less lubricated family members—at least one of whom has attached himself with the zeal of an Old Testament prophet to the belief that charcoal is the One True Way to grill and that grilling with gas is gayer than wearing ass-less chaps and a pink boa—or simply that the grill stands there in our domain, a last free outpost of manliness, a sanctuary for us to invest with the last rituals of our gender.

Either way, the Correct Way to BBQ inspires much furor.

Unless you particularly ENJOY your meat with a charcoaled outside and red inside, here’s the too-simple-to-be-true way to achieve tasty, tasty carcass from your grill: Low heat and patience.

That’s it. Let me say it again:

If you’re BBQing with charcoal, there’s extra patience involved: You will need to let the grill sit until it becomes naught but embers. If you’re cooking with gas, just turn the burners ALL THE WAY DOWN after the grill has heated up. That’s right. All the way down.

But, a chorus of angry voices cries out, THAT’S NOT MANLY! Indeed it may not be. See, the goal here is to create tasty, tasty meat, not to make up for the cruel indignities life has visited upon you. That’s what lifted pickup trucks are for.

So, the burners are turned all the way down. You put the meat on the grill. Now leave it the hell alone for ten minutes. Yes, we are going to use manly-man technology to help us BBQ. That technology is called a watch. Wait at least ten minutes, then turn the meat.

Then go sip a tasty beverage for another ten minutes, while watching the grill in case there’s a grease fire. After ten minutes, go turn the meat again.

Depending on the cut of meat, it might be done now, but probably not. Cut it open and take a look. Is it the level of pink you want? Then you’re done. If not, leave it for another five.

If you have a cheap grill—like me—or you buy fatty meats, you’re going to have a grease fire. It’s unavoidable. Just move the meat out of the way and use your scraper to extinguish the fire.

The result of all this is better-tasting meat and less stupidity in the world. These are both fine things.

« Review: Drenai Tales
Out of Nebraska »