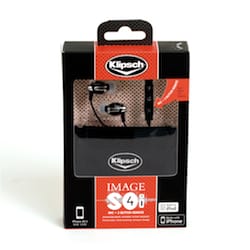 I wanted better headphones than the ones Apple ship with the iPhone, but still wanted the mini-remote and microphone on the cord. After some googling, the Klipsch IMAGE S4i (Amazon affiliate link—show some love) seemed like a good choice, despite the capitalization nightmare Klipsch has wrought upon the world.

I was a bit apprehensive about them being in-ear headphones after having read stories about people with oddly-shaped ear canals not being able to get a good fit, and thus not good sound, but they are comfortable and fit easily. We all have different ear canals, obviously, but as far as I’m concerned, no problems. And they ship with different size cones, so if the medium won’t do it for you, at least you can try the other sizes.

The sound. Well. I’m no audio engineer, and since I paid for these things with my own money, I couldn’t afford to do extensive comparisons with other headsets, but as far as I’m concerned, they sound freaking amazing. The bass stays crisp, even on torture tests like Bill Laswell’s subwoofer-killer Dark Massive/Disengage. Mids and highs have great separation and clarity.

Going to the S4is from the Apple-supplied headset is like going from standard-def to Blu-ray—the difference is huge.

One issue—and I feared this would happen—is that they’re useless for exercising. When your ear canal gets sweaty, the buds slip out like little greased pigs. Seems like it’s an issue with the whole concept of in-ear buds, although I’d really like feedback if anybody out there has found a set that stays in even when the canal gets sweaty.

UPDATE Dec. 8: As noted by the indefatigable Joe in the comments, the Comply foam tips work great for exercising, and are also a bit more comfortable than the Klipsch-provided tips. /UPDATE

Another thing with using in-ears for exercising is that since they work by blocking the ear canal you hear your own heartbeat and breathing. An odd sensation.

Actually, while we’re on the topic of headphones, what the hell happened to the neural interfaces we were supposed to get? No buds, just a wireless signal to subcutaneous receptors that feed the auditory nerve.

It’s like I just wasted all my time in the ’80s reading Cyberpunk.

To sum up: Far as I’m concerned, the Klipsch IMAGE 4Sis are worth the hefty price.