There’s frost on the car windows in Phoenix. Confusion ensues. 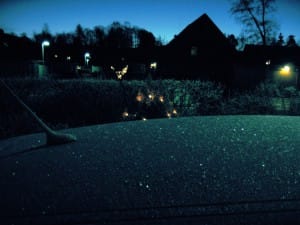 It’s been cold enough in Phoenix lately that there’s frost on the windows of cars parked on the street. Not a lot of frost, just enough to turn the windows opaque.

The other morning one of my neighbors got in his car and started to drive away, only to realize that, confusingly enough, he couldn’t see out his windows.

Anybody who grew up in a cold climate would have immediately gotten out of the car and scraped the windshield and back window with a credit card or something similar.

But not our hero, who I can only guess was shivering and confused at this point.

Nope. He decides the way to combat the frightening, alien substance on his windshield is to wash the windshield. This took a while.

And then he was able to head out, windshield reasonably clear and the other windows still frost-covered, like a little mobile church with white-paned mosaics.

« Naked and sedated
Video on the Web: Your HTML5 won’t save you now »