Why We Get Fat

Nic reads a life-changing book on nutrition and wants to share it with you. 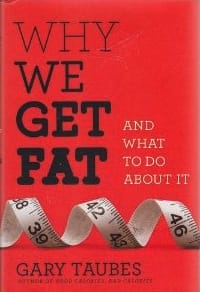 Gary Taubes’s Why We Get Fat is a complete game changer when it comes to diet and nutrition. It’s the kind of book I want to buy a hundred of then start walking around my neighborhood and pushing them on people. Amazing.

Basically, everything we’ve been told about nutrition and the food pyramid is wrong. Why do we have an obesity epidemic? Refined flour and sugar. Boom! Carbohydrates lead to insulin secretion lead to the calories turning straight into fat. This is all amply documented in numerous studies, and Taubes does a good job making the biochemistry accessible to lay people.

Did I mention everybody should read this book?

Why We Get Fat dovetails nicely with the paleo/primal scene spearheaded by several people including Mark Sisson on his excellent site. I’ve personally been kind of half-assedly attempting to eat and exercise more primally (if that’s a word) for several months now, and have lost about 25 pounds without going hungry or hating life, but Why We Get Fat is a huge kick in the ass. Carbs and sugar are poison. They make you fat and make you sick—type 2 diabetes, high blood pressure, even cancer.

The addictive and ruinous qualities of sugar were also highlighted in the New York Times, if you want to get some weight of authority behind the message.

Yes, he also addresses the FUD out there about heart attacks and liver damage that supposedly can ensue from a high-fat/low-carb diet. No single study has ever found a correlation. Ever. (If you know of one, please let me know.)

This isn’t to say Taubes is proposing some kind of magic pill. Getting your carbs down to a level where you lose fat means less than 100 grams of carbs per day. (Some people are more tolerant of carbs, which is the reason some people manage to stay reasonably lean even while consuming larger amounts. If like me you feel your waistband expanding a little each year, you and I are not those people.) Take a look at the nutrition labels next time you’re in the grocery store. Getting down to 100 grams per day requires serious diet adjustment.

For me, personally, it’s a huge mental shift to get out of the mind set of the food pyramid—it’s scarily ingrained.

Breakfast is hard: I’ve eaten bread for breakfast my entire life. Trying to get used to boiled eggs and plain greek yogurt at this point. Also cut out orange juice since it’s loaded with sugar. OJ so good. Sad panda. But it’ll get better. Courage.

The biggie is lunch. There is no better delivery vehicle for cheese and ham than bread. Whole wheat, but still, too damn many carbs. And that’s when I bring my own lunch, which I usually do, what with being a massive cheapskate. Packing salads means making salads, means having even less time in the evening. But perhaps that’s the way it’ll have to be.

(If you eat out for lunch every day, do the math: say you eat normal fast food type stuff. About $8 for the meal with the drink. Say 20 work days per month. That’s $160 you could do something else with. Twelve months per year means $1,920. Add in your $4 per day at Starbucks, and you’re talking real money. But perhaps you’re of the landholding class and scoff at money issues. I’m not.)

I don’t even want to think about finding something low-carb to buy for lunch around where I work.

So there are challenges. It’s not a silver bullet. But the more I do it, the easier it gets, and the leaner I get.

Buy this book. Read it. Seriously. Or you’ll find me on your doorstep one day in a nice white shirt and tie, waving the book at you asking, “Have you heard the good news about low-carb?” with a dangerous gleam in my eyes.

« Productivity for people who don’t have ADD

The end of the artifact »