Nic buys a new Kindle and tells you what he thinks about it. Read and find out if you should buy one. 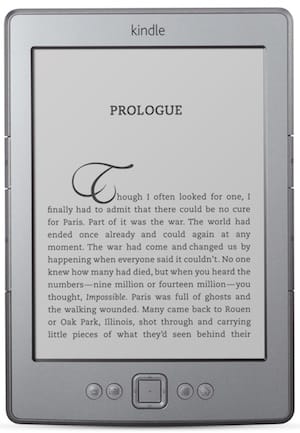 I bought a Kindle 4 (a.k.a. “Kindle no keyboard”, a.k.a. just “Kindle”—Amazon’s nomenclature regarding this device is a bit opaque. I’ll call it the Kindle 4.) Here are some impressions from a few days of heavy usage.

A definite improvement over the Kindle 3, but we’re talking evolution, not revolution. The Kindle 4 is slightly smaller, slightly lighter, feels less plastic-y, and of course doesn’t have that silly keyboard you never used anyway.

There are big wins apart from those things: First, it’s noticeably faster at things like accessing word definitions. (One of the many beauties of reading e-books is that it’s so easy to look up definitions that I do it constantly. It’s turning my vocabulary brobdingnagian. Holla!)

Second—and yes, I know this is the height of first world problems—Amazon changed the on/off switch to be a button instead of a slider. It makes a huge difference.

Third, the page forward and back buttons are smaller and more recessed, so there’s less chance of pushing them by accident. It’s a nice touch. (They’re still placed a bit awkwardly for big peasant hands, though—I wish they were a bit higher up.)

Finally, the screensavers are no longer semi-creepy woodcuts of dead people. Instead, they’re fine-arts photos of writing implements like fountain pens, typewriter keyboards and lead type. They look nice and blend well with the metallic-looking bezel.

On the downside, the page forward and back buttons still feel cheap. Now that the rest of the Kindle is nicer, that tacky feeling is more jarring. You do get used to it, but if there’s one thing I hope for the Kindle 5 or whatever it will be called when it comes out, it’s less ratty buttons.

But Amazon giveth and Amazon taketh away. The Kindle 4 has no audio, so no more audio books. I guess Amazon discovered that people who want to listen to audio books usually listen to them on mp3 players or their cell phones instead of dragging around a slate with an e-ink screen. And without the larger audio file sizes to consider, Amazon did the obvious thing and cut the internal storage to 1.25 GB usable. Which is OK. Really. E-books are small.

If you already have a Kindle 3, should you get the Kindle 4? Maybe. It’s definitely nicer, but not a massive leap forward. Unless you’re like me and the sheer existence of the keyboard-to-nowhere annoys you and you look up a lot of word definitions, I’d put the money into books instead.

I sprung for the non-advertising-supported Kindle, since my sanity is worth more than $30. I expend a lot of time, effort and money to expose myself as little as possible to advertising, especially when it comes to my reading. I don’t want to read in a bazaar with people yelling at me.

As a sidebar here, Kindle OS 4 defaults to only doing the page refresh every five or so page turns, which reduces the page-turn flash frequency at the expense of the text getting grayer. This to me seems non-optimal. My brain already filters the page-turn flashes. I don’t see them. If they only happen every once in a while I might notice them. And I don’t cotton to reducing the text quality. There’s a Kindle OS 4.0.1 update which lets you turn this silliness off. Make sure to update.

But the Kindle 4 wasn’t the only announcement Amazon made. There’s also the Kindle Touch and Kindle Fire coming down the pike. I’m not at all interested in the Touch since—sing it with me, kids—the screen will become smudged.

Another wrinkle in the purchasing calculus is the base Kindle no longer has 3G support—if you rely on that, you’ll have to step up to the Kindle Touch or Kindle Fire or get a previous generation Kindle Keyboard 3G (née Kindle 3 3G. Kindle names are fun).

The Kindle Fire definitely has my interest, but since I already pawned my future to purchase two iPads, I can’t really justify getting one. But I’m pretty sure Amazon has a hit on their hands. From what I’ve seen so far, it looks like a great media consumption device at a very, very nice price point. If you have plenty of disposable income and no idea what to give somebody for Christmas this year, the Kindle Fire is your answer.

(Idiot “analysts” of the Internet: Shut your ignorant yap holes. The Kindle Fire is not an “iPad killer.” The devices cover different markets with a small overlap. Just because they’re both tablets doesn’t mean they’re in direct competition. The difference in screen size between seven and ten inches is quite significant, and then there’s this little thing called “software.” You may want to look into it. Because on a tablet, the “software” is absolutely crucial for functionality and the “software” on the iPad and Kindle Fire are very, very different indeed. Remember how you kept calling the iPad a device only for media consumption? You were wrong about that. If you call the Kindle Fire a device only for media consumption you will be more right—but not entirely right. That’s partly because of the screen size and partly because Amazon have cunningly invested the Kindle Fire with easy access to all the digital media they sell and rent. As John Siracusa said on an episode of the highly entertaining Hypercritical before Amazon announced the Kindle Fire, “I can imagine the Amazon tablet mostly being a fancy color Kindle… a magical, colorful window through which you can give money to Amazon.” But stop it with the Highlanderism. Just like with cars, there can be more than one. No, really, the market is large enough to support more than one product. I know, I know. Sit down and take a deep breath while I fetch you a glass of water.)

« Why I’m all-in on FiveFingers