Been spending a fun few days powering through on getting the house back in order—it was well past time.

The majority of time was spent getting the books back on the shelves, and do it right with alphabetical filing, so I can actually find things when I’m looking for them. What a concept!

Strangely enough, I’m much faster at going through the alphabet when I think it in Swedish rather than English. Guess it’s just better “wired in” in the native tongue.

Here’s what two of the six book cases look like now: 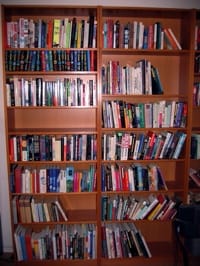 The astute reader will notice that the alpabetization looks a bit off: The titles are split up into non-fiction, fiction, and Swedish. And the Terry Pratchett titles on the second row are there because they fit the space. Can’t not have some anarchy in there, can I?