Update: Defective Yeti skewers the heart of the $100-check-because-we-feel-your-pain scheme.

The price of oil—as anybody who is forced to drive a car to work knows all too well—is rising dramatically again, and this time without any major crisis like a hurricane, war, or pipeline rupture to provide a dramatic justication for the increase.

Oil companies have been posting record profits for years, but that can certainly not have anything to do with the high price of gas. Seriously, it’s Econ 101—the cost of producing a product versus the price that can be charged for the product has nothing to do with the profit a company can reap. Everybody knows that. Right?

So what, then, is the response of the people we, as a society, in proud democratic elections, have chosen to represent us? How about issuing a one-time $100 tax rebate?. Making sure the government coffers get even more depleted so people can buy another week’s worth of gas certainly is long-term thinking at its best. Kudos.

It is, after all, the government’s job to ensure that the populace has enough money to pay companies for product. And since all the real issues in this country have been solved, why not just spend the money on making sure the oil companies get paid?

Nothing, absolutely nothing, can illustrate the moral stance of our elected officials more than this picture and caption from Yahoo!: 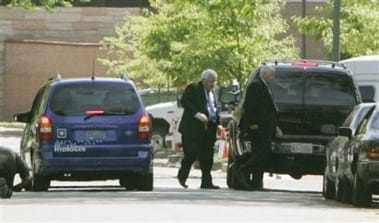 House Speaker Dennis Hastert of Ill., center, gets out of a Hydrogen Alternative Fueled automobile, left, as he prepares to board his SUV, which uses gasoline, after holding a news conference at a local gas station in Washington, Thursday, April 27, 2006 to discuss the recent rise in gas prices. Hastert and other members of Congress drove off in the Hydrogen-Fueled cars only to switch to their official cars to drive the few blocks back to the U.S. Capitol.

There’s a broad and pretty clearly delineated line between bolstering your image and being an utterly morally corrupt leech that feeds on society.