Just like last year, Andrea and I are spending the holidays in Sweden with my family.

It’s five thirty on Saturday morning here, and I’ve been up since four when the little jet lag alarm clock in my head decided to go off.

Had a really good flight with no problems except for my utter inability to sleep in any kind of vehicle including air planes. It’s kind of a long flight, and not being able to sleep makes it feel even longer.

Andrea was a total champ the entire time; the difference in maturity between three-and-a-half and four-and-a-half makes a lot of difference for exercises like this. 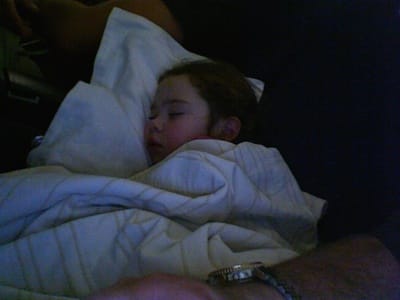 Comfy sleep on an Airbus. Click for larger version.

As the picture shows, Andrea doesn’t share my sleep quirk—she slept for about two hours on the flight from Chicago to Stockholm. Which of course really isn’t enough, but she stayed cheerful through the entire journey.

Oh, and that’s my watch showing in the picture. Took it with Photobooth. Apparently CBB, the company that provides Internet connectivity on flights has decided to shutter their business at the end of the year for whatever reason, so the Internet connection on the flight was free. Yay, free Internet and sleeping child! Could things get any better? Turns out that yes, they could: even though the connection was free, you still had to create an account with CBB, including giving them your credit card number.

Hmmm … handing out my credit card number to a company that’s a few weeks away from closing? That doesn’t seem particularly bright, so no Internet for me.

Surprisingly, it seems that the Internet gets along okay even when I’m not on it for 24 hours. Who knew?

« The MacBook and the Apple curse
Airport play park »