A pixel too far 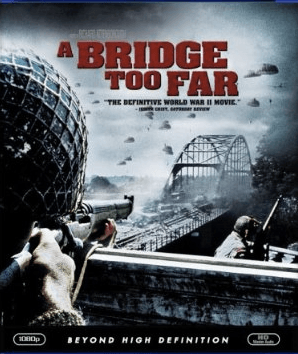 It was time to pay some more guy tax, so I bought a Blu-ray player now that they’re finally available for around $250.

Yes, it’s still way too much money to pay for better picture quality, but the testosterone needed out, so there it is.

Thanks to Netflix and their ever-growing selection, I’ve started to go through old movies that might benefit from the shiny high resolution. Big movies. Like A Bridge Too Far. Which I’ve never had the pleasure of seeing in a theater, but have caught on TV multiple times. Finally, it was time to see it (kind of) the way it was meant to be enjoyed. Obviously, my budget precludes purchasing an HDTV measured in feet instead of inches, but Blu-ray provides some serious crispness to make up for the size.

Not only is A Bridge Too Far one of the great WWII movies, but it’s such a nice change of pace to watch a movie expressly made to be enjoyed in a theater, made before rental residuals were a gleam in some Hollywood accountant’s bloodshot eye, before ADD gripped the industry. You’ve paid your money and parked your butt in the seat, so the movie will take its time. No worries that you’ll switch the channel or answer the phone. You’re in the theater and you’ll damn well stay, so there’s no rush. Let the momentum build. Introduce some characters. Hell, put in a few side plots while you’re at it.

Even in an action movie, the throttle doesn’t have to be stuck between “Turbo” and “Red line”—some scenes take some time to develop, and that’s okay.

And you’re rewarded for paying attention. Imagine that. Instead of just getting annoyed at the plot holes and inconsistencies, you actually get more out of the movie by paying attention. Almost like it’s not normal to be ADD.

« Review: Ready for Anything
Your own personal GTD »