Nic buys a Kamado grill and wants to share his joy with the world. 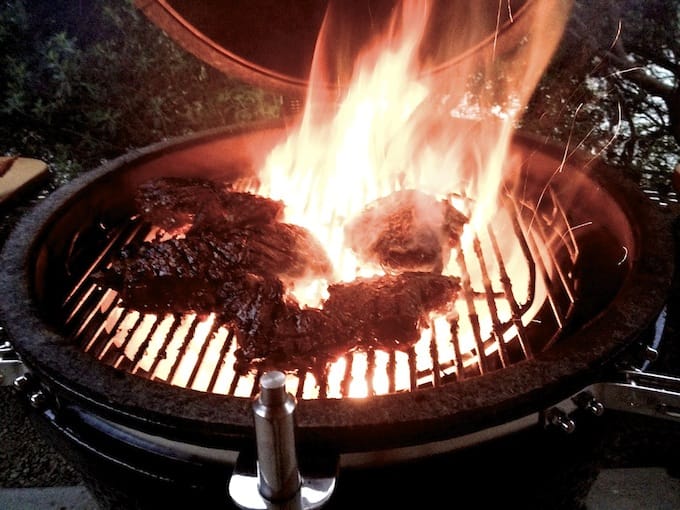 Flame on! Searing meat on a Kamado grill

You may have heard of the Big Green Egg, a Kamado-style grill inspiring near-religious fervor among barbecue nuts.

I don’t have one of those. Oh, don’t get me wrong. I wanted one. Went to my local barbecue place, got a quote, got the quote wife approved and then one of my cats got his butt kicked in a fight leading to the entire Big Green Egg budget going to his vet bill.

And lo, there was sadness.

But Costco has started selling another Kamado-style grill at half the cost of the Big Green Egg, and as our bank account had recovered somewhat from the damage caused by that damn cat and his fighting ways, it was time to (trumpets!) Enter the Kamado.

The brand sold by Costco is Vision Grills, and follows the same concept as the Big Green Egg, except it’s not green. Instead it’s a black egg. I’ve named mine R2-D2—surprise! I’m a huge nerd. The Vision Grills egg at Costco will set you back $569, which like everything else at Costco is a great deal.

Granted, I don’t have a Big Green Egg to compare it with, so it’s quite possible the Vision Grills egg is a horrible joke compared to the original. But I doubt it. If wrong, I might literally die from happiness if I eat something grilled on a Big Green Egg. But more likely the Big Green Egg is like Bose: They have a great brand and charge a premium for the name plate. Nice work if you can get it.

A note here: If you decide to get a Kamado-style grill of whatever brand, you will need a truck and at least two burly men to bring it home. The one Costco sells weighs 200 pounds. Yes, a 2 and two zeroes pounds. Ceramics are heavy.

The reason you want to break your back dragging one of these things home is simple: Food grilled on it tastes frigging awesome. You can grill, you can sear, you can smoke, you can use it as a pizza oven, and it all comes out better than anything else you’ve grilled. Really. Better. So much better. The egg is sealed, so it ends up functioning as grill and oven at the same time, locking delicious moisture inside, and it gives you incredible temperature control. Once you dial in the controls, you can set it at a certain temperature and by golly, it will keep that temperature until the charcoal runs out.

There is a definite learning curve, so if you’re interested in a Kamado egg, here are a couple of tips that will save you some trouble and time: