Nic hears there’s a lack of cat pictures on the Internet and decides to help out by posting a picture of his cat Phoebe. 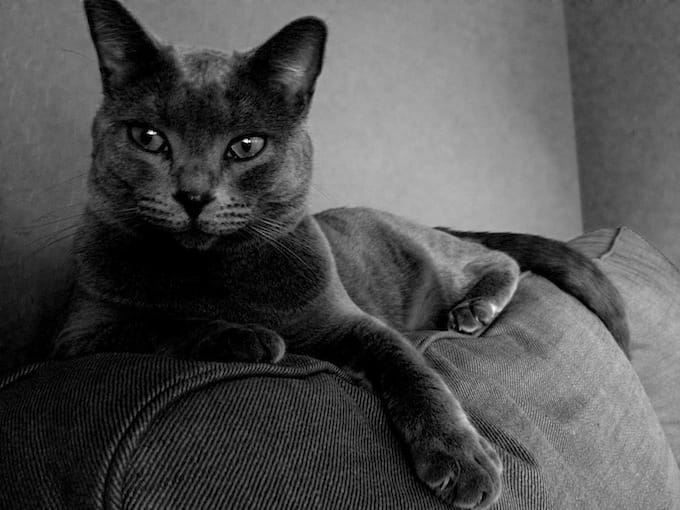 Phoebe the cat reclining on her favorite couch.
Click image for larger version.

Hey! Did you know people like looking at pictures of cats on the Internets? Turns out it’s true, so I figured I should help out.

We have three cats in the house—that way there’s enough of them to have a little mini-pride and their interactions become interesting to watch. Turns out that for self-sustaining predators, they sure have a lot of social pecking orders to work out.

All our cats are rescues, thanks to the stunning amount of idiots who somehow manage to not get the memo about spaying and neutering their animals.

The answer, of course, is that you won’t. You have the money; you just don’t want to spend it. Which makes you the kind of asshole who sentences innocent animals to a slow, painful death of starvation and disease for no other reason than you being a dick.

And you should be ashamed.

The beautiful animal you see above is an example. She was found as a kitten, starved and sick, mostly dead, and was brought back to health by volunteers spending what I think is a bit more time, energy, and money than might be prudent for a kitten. But be that as it may, they succeeded and Phoebe survived to become a happy, content cat now having a life of security and love.

We think she’s mostly a Russian Blue, since she has the charcoal fur and rings on her tail common to that breed, but of course, any time an animal is found half-dead on the street, it’s impossible to really know. What we do know is that we hope to have her with us for a long time.

« Noises in my head: Four midrange headphones reviewed
Ebook creation is still a bag of hurt »