Nic reviews four sets of midrange headphones. They all meet with approval. 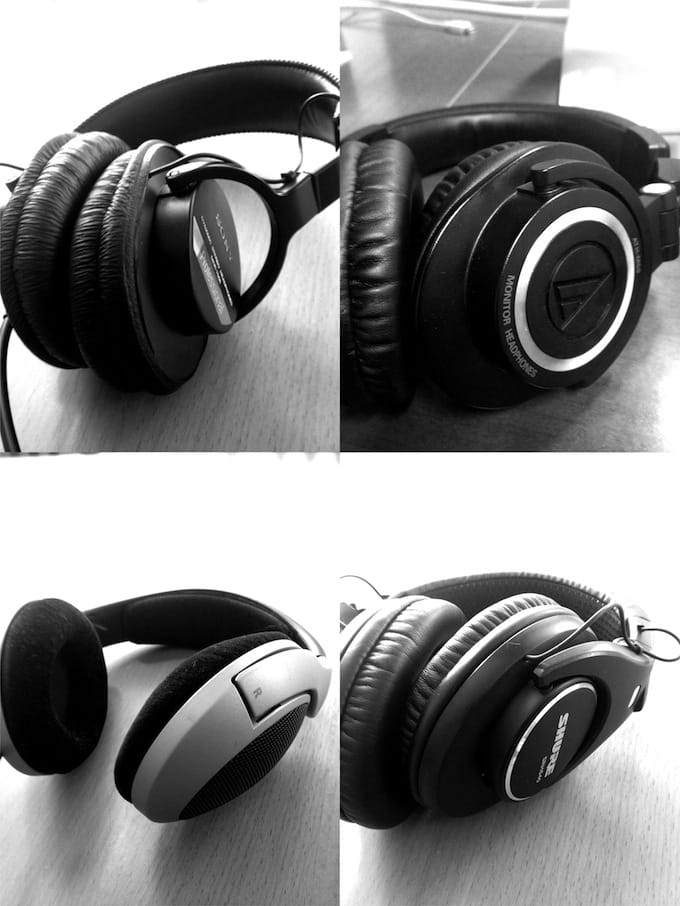 Many middle-aged men buy sports cars to soothe their angst. I can’t afford a Porsche. So instead I decided to find the best pair of headphones in the slighthly-insane-but-available-to-the-middle-class price range of $100 to about $200.

Here’s the justification, apart from me spending less on this project than the monthly vig on a sports car: When my daughter was born I started to watch TV with headphones. This was mostly due to the Sopranos, the language of which you obviously do not want a toddler to hear. After that, I realized that I love silence, so now we’re a household of people who use headphones all the time. It’s great. Can’t recommend it enough.

This is probably OCD related, but I simply can’t have background noise, especially TVs. Why? Because if something is moving and making noise, I pay attention to it. Which means I’m not paying attention to the thing I want to pay attention to.

I interact all the time with people who have spent their working lives in the equivalent of an arcade and somehow they’ve been able to create meaningful work. I have no idea how they’ve managed that. For me, uncontrolled noise kills concentration. This includes people talking in the next cubicle over or that guy who sneezes all the time, or some random TV show blathering on.

Can’t have that in my home.

And thanks to the wonders of headphones, I can tune out all the noises I don’t want. Which is great. But if I’m going to do that, obviously I need the best sound possible. I mean, I’m not an animal.

And no, I don’t have unlimited funds, so these purchases and evaluations were made over the last couple of years and given their time.

Being a good nerd I started this process by researching headphones on the Internet. Mistake! Oh, the hours of my life I’ll never get back spent on audiophile forums. I’m used to nerd insanity, having been involved in technology for a long time, but man, the audiophiles are special kind of crazy. I’m seriously waiting for the first audiophile suicide bomber. I’m not linking to any of the forum, because, really, you’re better off that way. Stay away from the audiophile forums. Those people are freaking nuts. And surprisingly angry for people who can afford to drop thousands of dollars on speakers.

As an aside, here’s Nic’s rule for how nutty any community will be: Look at the number of women. If there are few or no women participating, you’re heading to Nut City. Which just reinforces what I’ve said for years: Men need women to keep us from doing dumb things. A man left to his own devices will come up with ideas like “I can rebuild the carburator in the car by myself,” or “Call a plumber? Pssh! I’m a man!”

I ended up purchasing four headphones to use to listen to music and movies. Sennheiser HD555, Sony MDR-7506, Shure SRH840, and Audio Technica ATH-M50s. They’re all somewhere around the $100-$200 range, depending on the deal you get. So we’re in “you have some disposable income but you can’t afford a sports car” territory.

And how do they sound? Great! They all sound great. As they should. You spend that kind of money, yes, the headphones should kiss your ears. Which ones you end up liking is in the end a personal choice.

The Sennheiser HD555s are extremely flat, meaning that for most people you’ll want to hook them up to a system with a good equalizer. They are also the only open set of headphones in this very informal test. Open means they have a huge sound stage—they emulate a 3D space really well and thus are great for movies and classical music, but open also means they leak a lot. I would be watching a movie and my daughter would complain she could hear it in her bedroom down the hall with the door closed. So, yeah, leakage.

If you want a wide sound stage, have a system with an equalizer to get rid of the flatness, and are alone or with extremely tolerant roommates, the HD 555s are solid headphones. They’re also extremely comfortable.

The Sony MDR-7506s are by far the lightest and most comfortable of the closed headphones. If you plan to wear your headphones a lot, these are the ones to get. They also sound great, but suffer a bit in the bass department. If you watch a movie with deep explosions, you can feel the MDR-7506s pop as they struggle with the low frequencies.

The cups also come off a bit easily if you’re not careful about how you take them off. This is probably mostly a problem if you let a child use them. Putting the cups back on isn’t hard, but it’s annoying.

Apart from the sometimes-struggling bass and the cups popping off, these are great headphones. They’re plugged in to the computer streaming Electric Area on Sirius XM through the great Pulsar app as I’m typing this.

As an aside, one hugely annoying oversight in OS X is the lack of a system-level equalizer. I never could understand why Apple insists on leaving that out. But you can get one: Boom!, by Global Delight will give you the system-wide equalizer you deserve.

The Audio-Technica ATH-M50s are the headphones I use at work. They have extremely good isolation—put them on and the rest of the office disappears—and are strong across the spectrum, with the bass going as deep as you can handle and the highs crisp and pure together with very little leakage.

The M50s are workhorses and built like T-34 tanks. That being said, they are not as comfortable as the Sennheisers or especially the Sonys, but they’re not by any measure uncomfortable.

And finally, the Shure SRH840s are right up there with the Audio-Technica headphones. Solid performers, great sound, little leakage, and armor-plated construction, but they are slightly less comfortable. To my ears, the Shures and Audio Technicas are pretty much interchangeable.

Sound preferences are of course very subjective, and it’s possible there’s a great pair of headphones in this price range of which I’m not aware, but adjusting for their individual quirks and how they line up with your preferences, I’d recommend any of the four headphones discussed here.

Civilized human beings use headphones. Don’t be an animal.

Note: The headphone links in this post are Amazon affiliate links, which means I get a tiny kickback if you purchase one of them. It doesn’t cost you anything extra.