As part of the eternal War on Weeds (currently in the middle of the epic Operation Die Mother-F**ker, wherein I have resorted to chemical weapons of mass destruction) taking place in my yard, I did some pretty aggressive raking underneath the brushes to get rid of dead leaves and other detritus.

Due to the unusually heavy rains this year—the root cause of the incessant ranting about weeds taking place on this blog—I’ve been able to leave the drip system off for several months now, as the ground has been saturated enough to support the various fauna all by itself. But as Spring is upon us and the ground is drying out, it’s time to turn on the juice again. So of course I performed some testing to ensure that the drip system was performing to spec. Which it was not. Four major leaks, all caused by flag drippers torn apart by the raking.

Off to Home Depot to pick up new flag drippers, and then to replace the broken units. Three of which were really no problem, just involved getting slightly aggressive with the bushes in which the pipes were embedded. And then the time came for my nemesis, my Professor Moriarty, the heel to my Achilles, the broken dripper inside the torch glow: 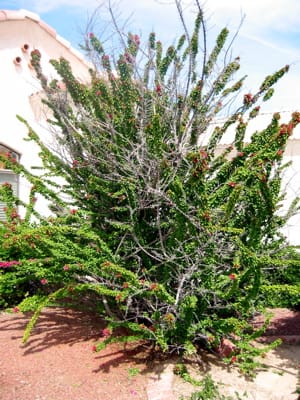 Inside this torch glow lurks a broken flag dripper

It is highly relevant at this point to establish that, indeed, torch glows have thorns. Lots of ‘em.

Further study of the situation—meaning turn on water and crawl around to spot the location of the leak—confirmed that the leak was located right in the center of the bush, a place that cannot be reached by human arms. Time to get medieval and break out the cutter. 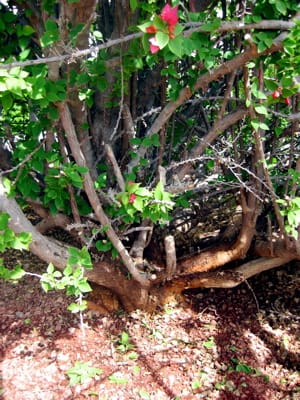 The leak was right in the middle

Some time later, I had cut a path and got access to the mutilated flag dripper. After scaring away a comprehensive sample of Sonoran insects and crawling close to the base, order was restored to the 100-acre wood.

So what have we learned today? The most important lesson, I think, is that if you live in the desert, xeroscape your yard. This will let you not install a drip system and consequently not have to deal with the inevitable breakages.