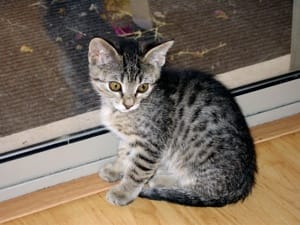 My name is Isis. I hate my human for taking me to the vet.

Had to take Isis to the vet yesterday for her first appointment for shots. And I mean had to. When you adopt a kitten from a vet they make you sign this contract that you will, indeed, bring the cat back for all the scheduled vaccinations and surgically make sure that it will never reproduce.

“What are you feeding her?”

“Humph.” (Translation: You’re feeding her that crap? You cat-hating swine.) “Is she comfortable in your home?”

And then it went on like that for a while. They really love animals.

After that, the vet started examining Isis instead of me. And Isis was doing great. She’s a big, strong kitten. So based on her non-mutilated and non-starved status, I suppose we won some points.

And then it was time for the shots. But first: the temperature-taking. Which involves a thermometer and a cat rectum. Isis didn’t like that at all. She was staring at me with those accusing little eyes and screaming her heart out.

So, leaving the house for the first time and then being rectally violated was apparently not a good time for her.

After that there was a shot in her shoulder, which went pretty well, and then another shot which involved no needle but instead a huge pneumatic gun. Which made a rather disturbing noise when they shot her with it in the left back leg. And freaked her out, leading the vet to comment, “It usually doesn’t disturb them that much.”

At that point we were done with the shots, so back in the cage she went, meowing and screaming.

And then she screamed the whole way home, and once we got back she went and hid.

But after sulking for a day, she apparently decided to let by-gones be by-gones. At least until the next round of shots.