You and what army?

On the joys of giving medicine to a cat.

Ah, the joys of having two felines in the household…

First Shiva, the older cat, started puking saliva and making strangling noises. If you’ve ever had the pleasure of enjoying the sound of a cat puking, this was the same but much louder and more disturbing. Little pools of saliva all over the house.

Like lava, that was not cool, so we spirited her off to the vet, where they discovered that she had a hair ball stuck and also, as a bonus, a urinary tract infection, and as an extra special bonus, she needs dental work—a cleaning and having her two lower back molars removed. They are infected, it seems, and have to go.

So about $150 for the exam and Amoxicillin, and then the cleaning and dental work will cost somewhere north of $300.

We gave her the Amoxicillin, which was surprisingly non-eventful. She of course was convinced this was some new strange form of torture we were inflicting on her, but ended up not resisting too much. It’s a good thing cats aren’t too bright.

After we finished her dose and were getting ready to take her back to the vet for the dental work, cat number two, Isis, decided to start peeing in our bath tub instead of the litter box.

Which actually turned out to be a good thing, because that made us notice that she had blood in her urine. If you’ve never done it, cleaning up a stinking pink liquid from your bath tub at four in the morning is about as fun as it sounds. Not so much recommended.

Another trip to the vet where it was found that, oh happy day, she also had a urinary tract infection. Cats also, apparently, spontaneously create these little crystals in their urine which sometimes—for no good reason—can become much bigger than usual and tear the urinary tract, which could also be a part of the blood in the urine. But we won’t know until she’s finished her Amoxicillin cure. 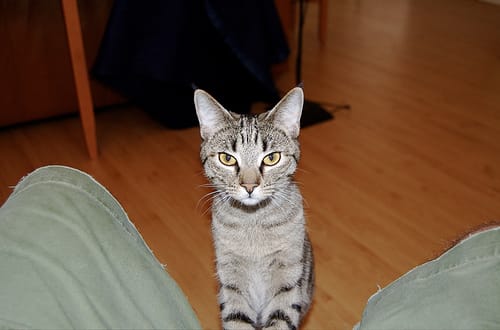 You and what army?

Which is not going to be easy.

When I picked her up the vet told me that they were going to call us for permission to have her x-rayed to check if there was something else going on in her bowels, but “she’s had it with us.” Yes, that is a quote from the somewhat shame-faced vet.

After the checkup she apparently went berserk and started biting the staff through the blankets they’d swaddled her with enough that there was nothing for it but to get her back in the cage and leave her alone.

When I picked her up she was in the cage growling and hissing at any and sundry including the guy who’s going to have to start donating blood to keep up with the vet bills.

And this morning we started her on the Amoxicillin, which was not popular. At all. We got most of it into her, but there was definitely clawing involved.

Dagnabbit, the idea is that if you grab them hard enough by the neck they go limp. That’s the agreement we have with cats, but it seems Isis was out to lunch when that deal was struck.

I have a feeling the next couple of weeks will involve plenty of rubbing alcohol.