Red carpet for the apocalypse

Nic is a bit creeped out by survivalists. 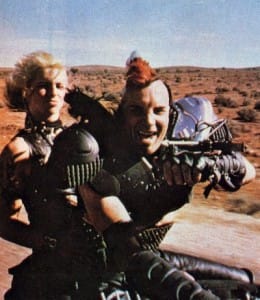 The other day The Arizona Republic ran a story about survivalists who are responding to the economic crisis by hoarding food, buying guns, and setting up gardens.

To those survivalists I’d like to say: Shine on, you crazy diamond. If it makes you feel better to build a bomb shelter, go right ahead. I mean, it obviously WON’T HELP, but if it eases your worry, great.

Why won’t it help? Because if there’s a real apocalypse—a full-tilt stop to the global economic engine resulting in roaming bands of outlaws—or mutants, why not—fighting for the last resources of civilization, your shiny Magnum and your bags of grains aren’t going to do more than postpone the inevitable for a few weeks, tops.

Unless you have special forces survival training, you won’t be able to find food. Unless you have special forces combat training, you won’t be able to hold off the mobs. Having a bunch of guns is not going to be enough. You have to know how to actually USE the guns effectively. This skill set is not magically imparted by watching a lot of Chuck Norris movies and reading Left Behind. Sorry.

But having a bunch of people respond to fear and uncertainty by deciding to go Mad Max seems to happen all the time, especially in the United States. Soon as there’s a crisis, real or imagined, be it the Y2K bug or Obama building concentration camps, the survivalist bile starts rising for a bunch of people. Man the bunkers! Get the guns! Protect the family!

The last time we saw this on a large scale was the Y2K bug, and one of the things that REALLY got to me back then was the GLEE underlying a lot of the survivalist freak-outs.

IT’S FINALLY HAPPENING! GET TO THE BUNKER! WHEEEE!

The people stockpiling food and ammo often don’t seem to be terrified so much as HAPPY. Finally, they seem to be thinking. FINALLY we’re done with this bullshit society. Finally I’ll be able to live off my wits and superior firepower against the hordes. The HORDES! The bastards who make me pay taxes and arrest me for driving drunk! Finally me and my shotgun will be able to LIVE like we’re MEANT TO. WITH V-8 ENGINES!

It’s the fun park aspect of survivalism that’s so bothersome—like finally we will be FREE.

Is life really that bad for some people that the prospect of the End of Civilization is the only hope for happiness?

« The first letter home
Louisiana to Missouri, via tow truck »