This morning Andrea came up with a way to combine two of her favorite activities: Watching the Teletubbies and coloring with crayons. That’s right. She colored the TV screen. I’m happy to report, though, that Windex and intense scrubbing will remove crayons from a TV screen. We learn something every day. 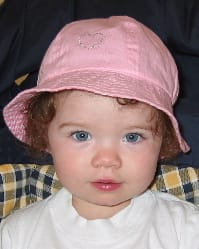 This little incident makes me intensely happy that we don’t have flat-panel TVs, or that she decided to pursue her activity on the laptop screen. Shudder.