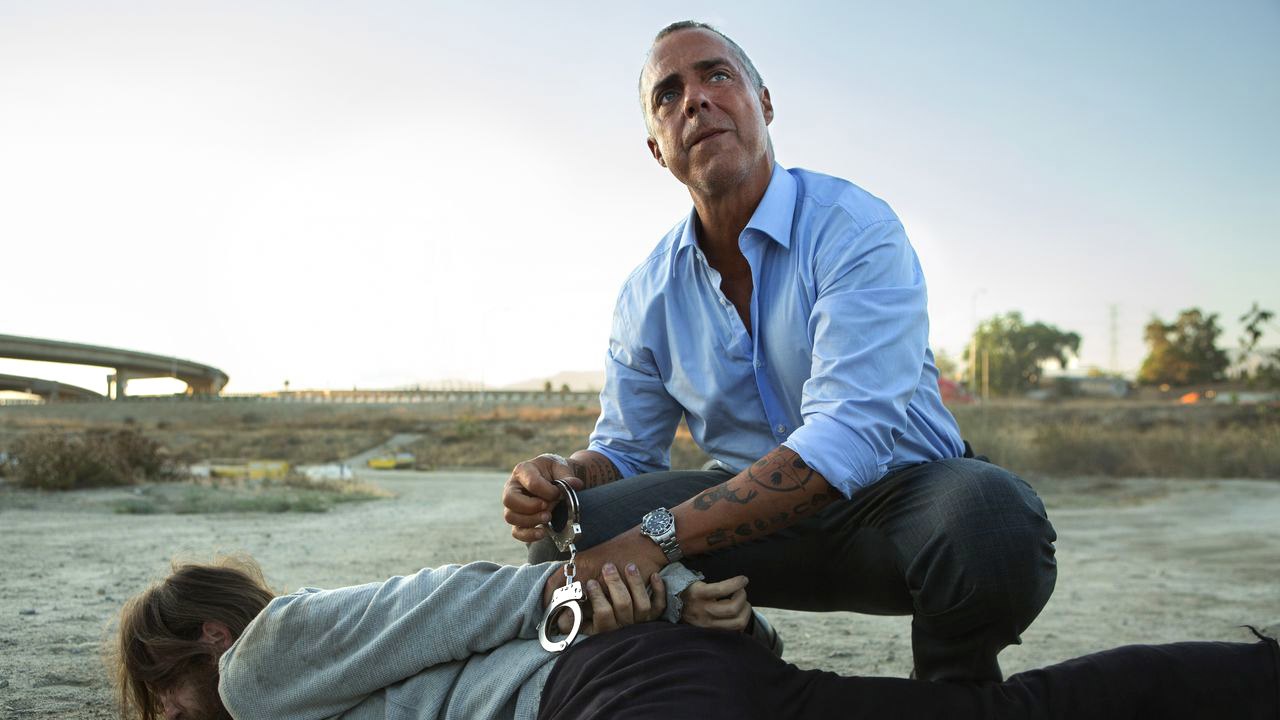 A longtime Bosch reader looks at the TV series.

Bosh is a TV series on Amazon Video, included with Amazon Prime, based on the novels by Michael Connelly.

I’ve been a fan and reader of the novels since they first started appearing, way back in the halcyon days of 1992, so I was excited when the news broke of the TV serialization.

If you’re not familiar with the novels, they are gritty police procedurals that follow detective Hieronymous “Harry” Bosch as he deals with gruesome murders, even more gruesome police department politics, the press, and his own psychological dysfunctions.

And yes, he’s named after the painter of grotesque hellscapes. Which is fitting.

In my opinion it’s one of the great detective series, up there with Ian Rankin’s inspector Rebus. Both series do a great job of following a character through time, having their circumstances change, and having the events they live through affect their personalities.

Thumbs up to both series.

If you’re new, you should most definitely start at the beginning, which for Bosch is The Black Echo and for Rebus is Knots and Crosses.

(Knots and Crosses actually isn’t all that good, but it is the beginning of a series which gets way, way better after that and damn it we have to have rules or we’re just animals.)

Personally, though, I think Connelly’s Lincoln Lawyer series is sharper than the Bosch series. Those might be fighting words in some circles, but Connelly started the Lincoln Lawyer series at the height of his powers after he’d worked out his (few) kinks with Bosch so they’re more spare and focused.

But this is about Bosch. One of the great police procedural thriller series and one that uses Los Angeles almost as a character. Los Angeles in all its grit and sun-blasted weirdness.

As of this writing, there are three seasons to the series, which instead of going novel-by-novel uses several novels per season, banging them together, tweaking and updating them for today.

In the novels, Bosch is a Vietnam veteran, but TV series Bosch is a middle-aged man today, so he’s made into a Gulf War I veteran turned cop. (It’s necessary to keep his military background since it formed his personality so much.) In the novels Bosch was a “tunnel rat”—the soldiers who went into the Viet Cong underground fortifications to fight and die alone in the darkness, while TV Bosch was, wait for it, sigh, special forces.

Why? Why always special forces? There are other soldiers.

But be that as it may, the series is updated for today including the age and background of Bosch.

First off, the cinematography is great. The series uses Los Angeles as a character just like the novels do and a lot of it is gorgeous. If you happen to have a 4K TV with HDR support, Bosch will show you why you spent all that money on your black slab.

The acting is also good straight through—weary detectives, sleazy politicians and sweaty perps, everybody digs in and seems to have a good time working.

The first season has some interesting development of supporting characters, especially Bosch’s partner and Bosch’s boss, who both foreshadow plot points of interesting lives.

Unfortunately, that gets a bit lost in seasons two and three, both of which feel a bit uncertain—the pacing gets ratcheted up with Bosch dealing with a murder, and another murder, and a court case, and his daughter, and office politics, and on and on, in a frenetic pace.

It feels—at least to me, and I could certainly be wrong; this is just a feeling—like the writers didn’t feel sure the source material was strong enough, so the show had to become faster, more amped up.

The pacing and supporting character development were great in the first season. It felt a lot like a British crime procedural. Seasons two and three feel more American.

This is not a compliment—most American crime procedurals are dreck as far as I’m concerned. Looking at you, CSI: WhateverleastIgotpaid.

That being said, it’s still good. I wouldn’t have watched it all the way through if it wasn’t. At its best it’s riveting, with some great plot points and turn-arounds.

The biggest problem with the series is Bosch himself. Titus Welliver plays the title character and he does do a good job of it. But he’s terribly miscast.

Bosch in the novels is a live wire—a damaged individual who oozes menace and physical violence. At least the way I read them, he’s also an imposing, physical man. Welliver is not.

He tries to make up for it with a three-cups-of-espresso intensity that might work if you haven’t read the novels. But if you have, it’s just not the same thing.

Somebody like Swedish actor Mikael Persbrandt from the Beck series or, if he hadn’t passed away, James Gandolfini of The Sopranos would have brought that sheer physical menace to the role.

This is what keeps the series from being really great and from embodying the feeling of the novels, that sense that Bosch is on the edge of hurting someone all the time.

Nevertheless, what we do have is pretty good. If you’re into police procedurals, Bosch is well worth watching.

But, screamed the old fogey, the books were better!

« Getting started with podcasting