The Heroes is an intense, wild ride into a maelstrom of violence, brutality and flawed human beings. You should read it. 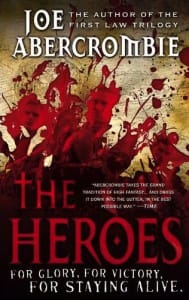 Joe Abercrombie’s The Heroes is the brutal, tragic and engrossing tale of a three-day battle between the Union and the Northmen of the same universe Abercrombie explored in the brilliant First Law trilogy and Best Served Cold.

In theory, The Heroes is a stand-alone novel; new characters in a new situation, but reading it without familiarity with the universe and the recurring characters would leach a lot of the blood out of the novel. And we certainly don’t want that. So, seriously, don’t read this until you’ve ingested The First Law.

That being said, if you have read The First Law, what you’re in for is more and better of the same. The same in that the novel is packed with epic, Tarantino-esque violence and populated with flawed, suffering and real characters. Better in that Abercrombie’s writing is tighter than ever. Less pyrotechnics, more payload; less feints, more bodyblows.

It’s a serious progression for Abercrombie as a writer.

The plot concerns a battle taking place at an ancient ruin known as The Heroes. Which should tip you off to the lack of actual heroes in the story, or at least to what you’d think of as classic heroes. In the myriad of people who populate the novel, there are several it’s hard to think of anything but heroes, warts and bad breath included, but there’s absolutely nothing Tolkien-esque about the battle of The Heroes.

Arguably the most impressive thing about the novel is that Abercrombie completely guts the template for the fantasy novel. We have the young man leaving his hamlet in search of glory, the knight in shining armor, the fight against a dark overlord, the barbarian warrior, et al., but Abercrombie sledgehammers these tropes together in new, noir, ways and inserts them into a compressed chain of events teetering out of control.

The Heroes is the kind of novel I know I’ll be re-reading in a few years. Abercrombie is on a fantastic trajectory.