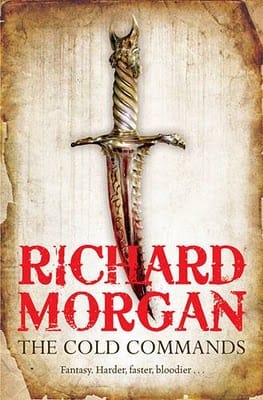 Sandman Slim, by Richard Kadrey: There are currently three Sandman Slim novels: Sandman Slim, Kill the Dead and Aloha From Hell (not available on Kindle, booh hiss). The trilogy is very even and covers the entire arc of the story so I’ll treat them as one in this review.

Sandman Slim shares more than a little with Jim Butcher’s Dresden Files: The world is full of ghosts and goblins, including angels, vampires and demons and there are some people who can see them and interact with them.

But if we were to put this in SAT terms, the Dresden Files are to Sandman Slim as Nightranger is to Slayer.

The concept is that Sandman Slim, a.k.a. Stark, a.k.a. Wild Bill is a minor-league sorcerer and major-league wise-ass who is betrayed by his friends and sent to Hell. Yes, capital-H Hell. Where he survives for 11 years until he manages to escape. And now he’s back in (where else?) Los Angeles and hell-bent on getting revenge on the people who betrayed him.

Which is not easy when your enemies are much more powerful than you, you have no money and the Devil himself takes a personal interest.

Sandman Slim is far from perfect fiction, but the plot moves like a rock shot from a rail gun and it’s deliciously bent and perverted.

My advice: Buy the novels but don’t read them until the next time you’re on an airplane. Time will fly like a lost soul.

Snuff, by Terry Pratchett: Pratchett’s Discworld novels started out very funny and very silly indeed, but as he gets older, the novels are imparted more and more with the gravitas of a man who has given the state of the world a lot of thought. They are still couched in comedy able to make you laugh out loud all by yourself in an empty room—there really can’t be a higher compliment for a comedy writer, can there?—but with an ever-widening humanitarian streak.

Go read them all, including this one. We’d have to make up Terry Pratchett if he didn’t exist.

The Cold Commands, by Richard K. Morgan: The follow-up to the highly successful The Steel Remains (my review here), The Cold Commands continues the tale of Ringil Eskiath, greatest warrior the world has ever known, ostrasized and shunned for refusing to hide his homosexuality.

The novel is very much a direct continuation of The Steel Remains and Morgan rightfully makes little attempt to bring new readers up to speed, so start with The Steel Remains. If you like that, you will love The Cold Commands. More of the same, but with the world building done, so it’s all fast-moving plot with more black humor, cynicism, ultraviolence, drugs, strange perhaps-gods, and gay sex.

Reamde, by Neal Stephenson: Stephenson is, of course, a master of 1,000-page head-exploding fiction. In Reamde he diverts into writing what is essentially a straight-forward techno-thriller. Think a nerdier Bourne Supremacy with a World of Warcraft-like game as a central plot point.

And oh, the plot. Stephenson’s work usually consists of just enough plot to hang a series of interesting observations and sidebars, but Reamde is almost purely plot-driven, actually plot-driven to a fault. There is much—too much—derring-do, narrow escapes and harrowing violence, but at least for me it started to bog down in middle (remember, we’re talking 1,000 page brick, here) with a lot of things happening but very little happening.

After the brilliant Anathem (my review here), Reamde is a pretty big let-down, but I can see why Stephenson wanted to branch out and try his hand at a different kind of writing.

That being said, this is definitely one to bring on your next long flight. Just don’t expect to have your mind blown. Guess we’ll have to wait for Stephenson’s next outing for that to happen.

Goodbye Darkness: A Memoir of the Pacific War, by William Manchester: Now mostly known as a great biographer, Manchester served as a Marine in the Pacific Theater during World War II. Thirty years later he finds himself haunted by nightmares and decides to go back and revisit the places where he fought and was wounded.

It’s a haunting journey as an older man confronts his younger self and his memories of war. Manchester is a great writer and observer and the battle scenes—or perhaps battle impressions is a better phrase—are vivid and disturbing, conveying the sheer horror of the conditions the soldiers endured.

Steve Jobs, by Walter Isaacson: The brilliant John Siracusa has already said everything that needs to be said about this biography. Listen to the master take this book apart on the Hypercritical podcast.

The Psychopath Test, by Jon Ronson: This is a wonderful book, charming and quirky, about what the author terms the “madness industry.” The book focuses on psychopaths and their detection, using that particular disturbance as an entryway into the history of modern psychiatry.

The book includes the man who conceived and designed the psychopath test, a death squad leader, scientologists and the man they’re trying to get released from a mental hospital and a strange hoax perpetrated on an international group of neurologists.

If you’re at all interested in the ways your brain can malfunction and the industry that exists to help (and profit), definitely read The Psychopath Test.