Nic reads a book about the processed food industry and is incensed. 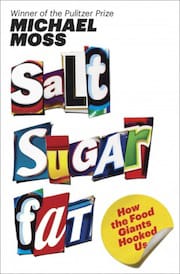 Salt Sugar Fat is the first must-read book of 2013. Meticulously researched, it tells the history of the processed food industry and how the industry has spent millions upon millions of dollars on research and marketing to sentence us to a catastrophic diet.

(Note: facts are from the book or linked; opinions are my own.)

Exceptionally smart people have spent their lives researching exactly what tastes we enjoy, how the food should feel in the mouth—down to the precise pressure required for a potato chip to give off the perfect crunch—and of course what exact ratio of salt, sugar and fat will yield the most sales at the lowest cost.

Salt Sugar Fat is a fascinating and frightening story of completely amoral behavior exhibited by what seem from the included interviews like smart, aware and well-meaning professionals.

Alas, well-meaning professionals who do not care about anything except sales numbers.

Well-meaning professionals who, it should be added, do not serve themselves or their children the products they create and market. If there’s any indictment of the food industry stronger than that the people who create the product will not consume it themselves, I don’t know what it could be.

But not just the food engineers who create the food products are scary: the marketers who sell it to you spend as much money and brain power to figure out how to make you buy it. Everything that happens in your grocery store is planned. Everything. There are no accidents. Behind the muzak curtain, mega corporations are fighting bloody, merciless battles to get their products optimum shelf placement.

Apart from the enormous cost in human suffering caused by obesity, diabetes and the host of other medical problems caused by a horrific diet, it’s depressing to think of all the good things that could have been wrought by all that money, drive and brain power. But nope. Going to sell the ever-living hell out of that cereal and get my bonus!

Now, if you’re of a libertarian bent you may be shaking your head clucking, “Fools! People are choosing to eat crap and get fat and sick and it’s their own fault!”

And sure, people of a certain class and with certain means can certainly afford to eat quite well—would Monsieur like the grain-fed beef?—and have enough knowledge of nutrition to lead a healthy life.

But in America in 2010, 17.2 million households were food insecure (meaning they weren’t sure where their next meal was coming from). These people have little choice but to go for the cheapest calorie possible and will in some cases be starving to death while obese. As a sidenote, that 17.2 million households are food insecure in the richest country on Earth should be a cause for shame for us all.

But it’s not just money, it’s also education and socialization. The average American exists in a dietary plane crash, bombarded with advertisements for unhealthy foods. When ads for hamburger restaurants, sugary cereal and ersatz Italian restaurants are what you’re bombarded with, they become normative—this is what people eat. I don’t see anybody eating anything else.

Salt Sugar Fat spends quite a bit of time on Lunchables, that cheery little cardboard lunch pail you can give your child to bring to school and feel like you’re not a terrible parent.

Which it turns out you are if you give your child Lunchables—they are loaded to the gills with, can you guess? That’s right: Salt, sugar and fat.

« The cargo cult of technology