Includes Shadow Ops: Control Point, The Night Circus, The Hunger Games, Quiet, The Science of Yoga, and Kitchen Confidential. Lots of good stuff in this one. 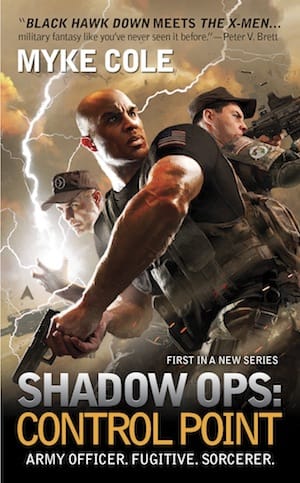 If you’re like me, you rolled your eyes reading that title. Ooooh, Tom Clancy junior! But the title is highly misleading and according to the Internet was inflicted upon this novel by the publisher, not the author.

The premise of Shadow Ops is that all of a sudden people have started exhibiting magic. The magic is latent in everybody and can start manifesting at any time. If you suddenly find yourself with the ability to perform magic and don’t immediately call in and surrender yourself to the authorities you are considered a Selfer and will be shot on sight. This praxis has its reasons, as practitioners of magic can do a lot of damage, but as the novel shows, the human price is high.

Shadow Ops starts off a bit slow, but when it picks up steam, man, this is one of very few novels in many years I’ve stayed up way too late reading. The plot is hard to summarize without spoiling it, but basically it’s a very thinly veiled War on Terror allegory combined with an interesting take on the value of freedom.

Apart from the title, my main gripe with Shadow Ops is that the sequel isn’t out yet. It leaves so many questions unanswered and characters I care about in a lurch it’s painful to have to wait.

If you have a long flight coming up, this is one to keep in your back pocket. Don’t let the title or the cover turn you off. This is good stuff.

The Night Circus, by Erin Morgenstern ★★★★☆

The circus arrives without warning.

No announcements precede it, no paper notices on downtown posts and billboards, no mentions or advertisements in local newspapers. It is simply there, when yesterday it was not.

The Night Circus is a novel that feels like a haunting dream. It’s what Anne Rice would write if she hadn’t gone around the bend—it has the same kind of feverish, silky feel as Interview With The Vampire without in any other way having anything to do with that novel.

It’s hard to summarize the plot without spoilers, since much of the tension in the novel is for the protagonist to figure out what’s going on and why the Night Circus exists. Let’s just say it involves a contest of magic and a young man and woman who grow up in most unusual circumstances.

The Night Circus hooks you and demands you keep reading.

The Hunger Games, by Suzanne Collins ★★★☆☆

For a Young Adult novel, The Hunger Games packs in a lot of violence and brutality. Set in a brooding dystopia that is the remnant of a collapsed America, where 12 subjugated, poverty-ridden Districts feed the parasitical Capitol and are required to each provide two young adults to partake in the titular Hunger Games, once-a-year deathmatches that all citizens are required to watch.

In essence it’s Mad Max meets Les Miserables against a backdrop of 1984. It’s a good recipe and it’s executed very well with light-handed but thorough characterizations—especially the protagonist Katniss who comes across as a complex, strong young woman—and a plot that moves forward like it’s on rails.

I’d probably not put it in the hands of somebody below grade six or so, depending on the maturity level of the child. Any younger than that and the child will probably miss out on a lot of the subtext. And as you’d expect, The Hunger Games is commendably violent. Commendably, in that if you’re going to portray something as awful as those games, it should be emotionally raw and make you flinch.

Worth reading for adults as well as young adults.

It’s not easy being an introvert in America. There might be another nation more closely aligned to the extrovert ideal, but if so it’s covered in mist. With Quiet, Cain provides not just an “I’m okay, you’re okay” view of introversion, but also provides examples of the strenghts of introverts and situations where introversion provides the necessary counterweight to gung-ho extrovert extravaganzas.

Two kinds of people should read Quiet: Introverts who want a better understanding of their place in society and, even more importantly, the people who manage introverts. As Cain makes plain in the book, introverts provide an important check and balance on extrovert tendencies. Hell, introverts can help avoid financial meltdowns.

As an introvert, I read it thinking, “Yes! I’m not a freak!” But Quiet is much more than an affirmation for the already converted: It’s a reality check for all of society.

A long-time Yoga aficionado, Broad decided to evaluate the claims made about the practice—becoming lean, becoming calm, etc.—from a scientific standpoint.

The book starts out with the itinerant yogis of India and their claims of walking through walls and other super-human powers, and how the rise of Indian nationalism at the end of British rule morphed yoga into something very different from its historical roots. Hint: yoga used to be a sex cult.

From there it moves to the current yoga craze and the very serious issues that arise when you have something completely unregulated with the potential for serious injury and opportunities for unscrupulous people to make lots of money.

Interesting as the history is, the real meat in the book is the catalog of effects the practice has on both body and mind—Broad debunks lots of myths and finds surprising effects not widely known, including some of the scary ways you can hurt yourself doing yoga. Hint: don’t do the headstand. Seriously. Shudder.

The Science of Yoga is well worth reading for anybody practicing the art, but also for anybody interested in how exercise as well as meditation affect our bodies.

Bourdain is an executive chef of long experience, a man who’s spent his time in the trenches of the culinary arts, and he certainly isn’t shy about voicing his opinion.

Kitchen Confidential starts out with Bourdain’s childhood, how he learned to love food, and his teenage years of being an insufferable little shit. It’s a bit of a drag, to be honest.

The good stuff starts once he’s running a kitchen. At this point you really start to feel his love for food and preparing it. He’s also not shy about telling you what to look for in a restaurant, which foods to order on which night, and what you should absolutely avoid. Hint: Sunday brunch is not when the A-Team is working.

Personally, my respect for him skyrocketed in the chapter where he talks about visiting the kitchen of another highly-celebrated executive chef who runs his patch the polar opposite of Bourdain’s motley crew of misfits and drunkards and shows this chef total respect.

The core is weak »