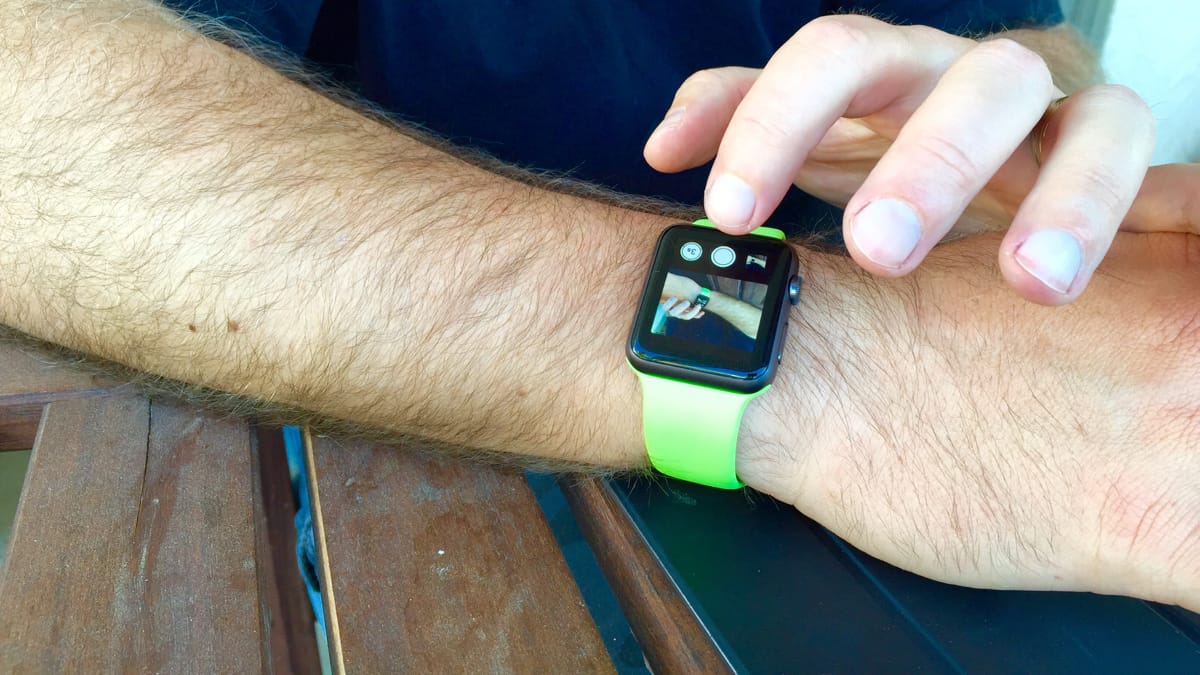 Thoughts on Apple Watch after half a year of daily usage.

I ordered mine as soon as they went on sale and have worn it every day since it arrived. It has made me very happy, though there are plenty of things to improve.

(For a look at my initial impressions, here’s my post on one month with Apple Watch.)

First off though, let’s keep in focus how amazing and future it is that we now have a computer on our wrists, a computer that lets us communicate with the world and that knows what is happening inside us. It’s an amazing thing.

Wearable computing is in its infancy, obviously. Right now it’s the wrist and wherever you like to strap your fitness tracking device, but as the technology improves it will get smaller and more powerful and go to many places on and inside your body. If you’re a diabetic, would you like to have a device that lives inside your bloodstream and tells you your insulin levels? Of course you would. If you have cardiac issues, would you like a device that keeps track of your heart and notifies your doctor if something is going haywire? Of course you would.

The possibilities for miniature tech are endless and also quite scary—do you want a bored teenager somewhere to hack your insulin pump?

But right now we’re talking about the thing on your wrist. Which is, together with the Pebble and Android Wear, in its first generation.

The things that are good

The most concise phrase for what Apple Watch does well is to call it an awareness amulet. Something happens, it taps on your wrist and you glance at it. Boom. Done.

Probably this could be related to the reason wrist watches became a thing in the first place, hmmm? Turns out having information on your wrist is really, really handy.

The raison d’être of Apple Watch is to let you see incoming notifications and deal with them. Sending a text message to let someone know, “Be there soon” or “In traffic” or simply “OK” just by pressing a couple of buttons is huge. It’s on your wrist. It lets you see what’s going on. It lets you respond.

If the thing that’s turning you off about wearables is that you’re the kind of person whose wrist is buzzing all the time, you’re doing it wrong. Seriously. It’s not a watch thing. It’s a you thing. You need to turn off everything that isn’t important. Remember, the only arbiter for what’s important and what isn’t is you. Go through your phone and make those decisions. And really, how many things do you need to get notified about? Be ruthless. You deserve a life of not being interrupted by bullshit.

Some of the faces on Apple Watch allow for complications—a term taken from the mechanical watch industry, meaning information nuggets like the date—which lets you put the things that matter to you right there on the watch face. This has huge unfilled potential—if your favorite app provides a complication, you can monitor it right there. Obvious things like calendar and weather are already built in by Apple, but there’s room for growth.

“Hey Siri” for reminders and timers

Siri is Apple’s artificial intelligence and she’s ready to help you on Apple Watch.

Raising your wrist and saying “Hey Siri, remind me to call Fredo when I get home” is so handy. You can talk to it and it understands what you say. That’s sci-fi.

I personally use it all the time to set timers, like when I’m cooking: “Hey Siri, set a timer for four minutes.”

This may be the most first-world thing ever, but it’s sometimes nice to be able to remote control your phone. For example, I listen to a lot of podcasts but I miss things when I’m in the shower. Step in the shower, hit pause, done with shower, hit play.

It might sound silly, but remember how people scoffed at the TV remote when it first came out?

The things that need to improve

Apple Watch has a heart rate monitor so it can help you track your exercise habits. It generates loads of data about your personal life, always watching you as you go.

Unfortunately the heart rate monitor is finicky to say the least, at least for yoga and weightlifting. Pretty much every time I exercise I like to glance at it now and then and it keeps tailspinning—heart rate is 114, 113, 116, 54, 114. What?

At the end of a workout the app shows your average heart rate and if the monitor has soiled itself that average is completely off, which really sucks. I would like to get credit for my work, thank you.

And yes, the band is tight and I don’t have any tattoos. It just goes into a “Hey, let’s chill out, man” mode.

Can’t just glance at it

Sigh. When you look at Apple Watch at rest you’re looking at infinity. Black screen. As a person who’s worn a watch my entire life and never considered pulling a phone out of my pocket a replacement, it drives me nuts. This is probably neurotic, but I need to know the time always, and with a regular watch on my wrist, I can always glance at it and know.

(Yes, I’m the person who shows up on time for everything. There is no excuse for being late unless you got stabbed.)

But with Apple Watch I can’t do that. I can’t glance at my wrist and know what time it is. Sure, I’m getting better about turning my wrist forcefully to make the Watch turn on for a few seconds, but that’s me altering my behavior to suit technology instead of technology adapting to me, which is completely wrong.

Top of the list for Apple Watch, as far as I’m concerned, is to be a watch.

The apps are too damned slow

Apple clearly imagined Apple Watch to be an app platform just like iPhone. That doesn’t seem to be happening.

Turns out you really don’t want to stand around and stab at your wrist—Apple Watch is great for handling incoming events, but why would you want to poke at it while you have a much bigger, faster device in your pocket?

The poor little processor also really struggles to launch apps, so it takes longer than is feasible to wait. You have to really want to use an app to have the patience to stare at the spinner while it loads. But with some optimization and help from Moore’s Law, that will get sorted over time. But the silliness of stabbing at your wrist won’t.

The one app I’ve found myself using on Apple Watch is Clear: Having my grocery list on my wrist and checking off things as I buy them is great. But again, that’s not really interacting with an app, it’s more of remote controlling my phone.

And the app launcher. Ouch. I’ll be shocked if it survives into watchOS 3. It is truly terrible. Hunting and pecking on that little circle is a ridiculous way to launch apps.

Since Apple Watch is not meant to be interacted with for long, apps are a hard sell, so it seems most of the action in that space will be in remotes for iPhone apps.

A day should be enough for anybody

Yes, you have to charge Apple Watch every night. It’s understandable considering all it does, and not that arduous once you get used to it, but it does mean you have to remember to pack the charger if you’re staying overnight somewhere, which is a bit tedious.

I’m not expecting that to change significantly as Apple tends to set a goal for device usage and then err on the side of thin and light rather than increasing the length of time you can use a device.

While you usually end up with a lot of battery left at the end of the day, exercise tracking slaughters the battery, so if you’re running a marathon you should probably top it up beforehand.

Is Apple Watch better than the competition?

I used to wear a Pebble and liked it. Of course the Pebble was uglier, both physically and user interface-wise, but it performed enough of the awareness amulet functions that are so core to the smart watch experience that if Apple were to discontinue the watch I could go back to the Pebble and be pretty content. And have a week of battery life.

Being the platform owner, Apple can do things third parties like Pebble simply can’t, so the integration between iPhone and Apple Watch is tighter than between Pebble and iPhone, but at least for now that doesn’t matter as much as it probably will in the future.

Between Apple Watch and Android Wear, it’s mostly a matter of which ecosystem you inhabit.

Apple Watch and its competitors are exciting devices that are forging a new path for electronics, but the category is still in its infancy. Unless you’re the kind of person who enjoys bleeding-edge tech or if any of the functionality you can have on your wrist excites you, the smart move is to give the category a few years to mature.