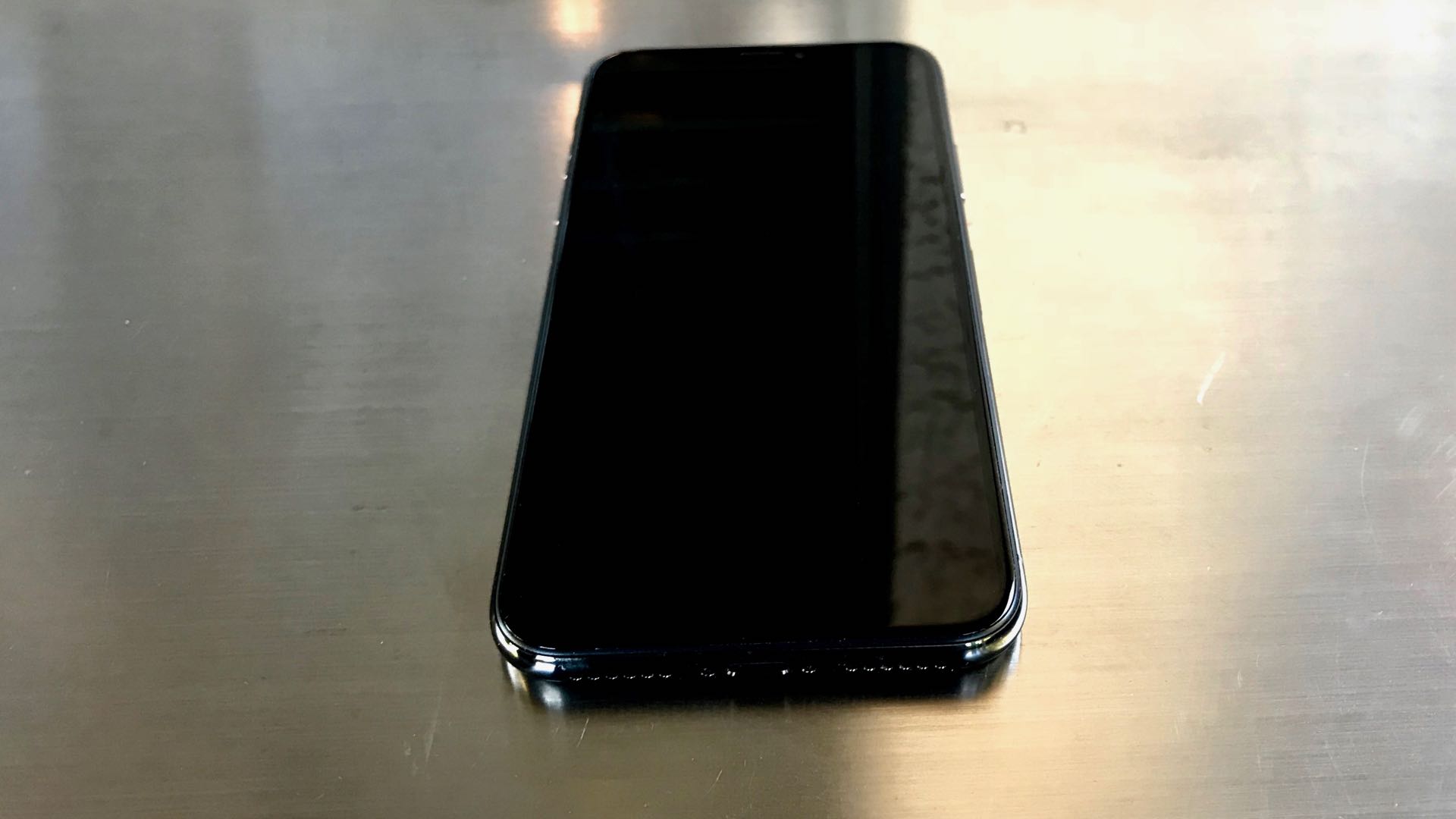 After a few weeks of using iPhone X I’m ready to join the congratulatory choir.

But iPhone X is fundamentally different. Ditching the home button is a massive change to how you interact with the device. Swiping from the bottom of the screen and unlocking with FaceID sounds like a detail, but it is not—it’s a fundamental change to the soul of the experience. More than ever, it feels like you’re interacting directly with a ghost in a machine.

Side note: This is probably part of Apple’s somewhat pathological loathing of physical buttons and ports. Anything on a touch device you can do by touching the screen itself is a little bit closer to the platonic ideal of the device, while buttons and ports are grudging allowances to physical realities. Realities that are to be hunted down and destroyed whenever possible.

I feel pretty confident on a late-night tea jag Jony Ive scratched open a vein with a perfect pencil and wrote that phrase or something like it on a wall in the design studio in his own blood, calligraphing the San Francisco font perfectly.

Of course, iPhone X is not perfect. Nothing man-made is. But it’s a major leap toward that platonic ideal.

For the record, I moved to iPhone X from iPhone 7, so just one generation. (Unless you want to enter Apple’s space-time continuum and count iPhone 8 as a generation immediately superseded by iPhone X within a month. But that’s a bit silly, isn’t it?)

The first thing to notice about iPhone X while setting it up is the screen. That OLED display still looks fake to me sometimes. It just doesn’t seem a screen can look that good. Really. That screen is jaw-dropping even if you’re just coming from a phone one generation away.

It’s like the first time setting up a Kindle, when I thought the e-ink screen was a sticker on the screen—a screen just shouldn’t be able to look that good.

But like with Kindle, iPhone X’s screen really does look that good. It’s incredible.

The device itself feels hefty. Not heavy, but substantial, and it is just a touch too large to be comfortable one-handed. Not as ungainly as the Plus models, but just, just too large. (And I say this a large peasant-man with beefy hands.)

So what about the dreaded notch? Meh. You stop seeing it very quickly.

Obviously it would be better if it wasn’t there, but apart from marring the platonic ideal, in actual usage your brain filters it out quick.

Though as somebody who uses a VPN quite a lot, it’s annoying that the notch can’t display your VPN status continuously; it just reminds you of the VPN right when it connects on the right side of the notch, and from there on it’s up to you to check the status yourself.

Annoying, but I’m probably an outlier in even using a VPN.

The home bar—a.k.a. home indicator, a.k.a. blotch thingy, a.k.a. grabby thing—is your visual cue to, hey, dummy, swipe up from the bottom of the screen to go back home.

It’s a very useful visual reminder for the first few days of using a home button-less device about what you have to do to escape from an app, and a clever idea in general. The kind of thing that reminds you that very smart people who care a lot built this thing.

But after a few days it becomes visual clutter. It would be nice to have a switch in the settings to remove it, but that probably won’t happen for a while. Patience, grasshopper: Apple will not remove it or allow it to be removed until they feel sure the removal won’t overwhelm the elves at AppleCare.

In the meantime, your brain gets good at filtering it out as well.

It is interesting, though, those first few days when years and years of habits have to be broken—it’s a bit panicky at first to not have the comfort of the home button there. Oh, no, what do I do?

And even though Apple gets a somewhat deserved amount of shit for their “courage” in removing things, making a radical change like removing the home button must have caused more than a few sleepless nights for the denizens of the space ship.

They didn’t have to do that. Nobody was telling them to do that. But they did it. And it was the right decision.

For me, FaceID has worked mostly flawlessly. The only—very slight—annoyance is that I have to hold the phone just slightly higher than my body’s default for FaceID to recognize me. And I’m starting to hold it higher, inch by inch, without really thinking about it.

The battery life is spectacular, at least comparable to battery life on the Plus size models. I haven’t done any specific benchmarking, but it feels like a Plus and I never feel battery anxiety.

The battery life is greatly aided by QI charging. QI charging is magic. Spend some money on little pucks to litter around your home and office and now you can just drop the phone on them whenever you’re not using it and the phone sits there and charges.

It’s a lot like remote controls for TVs, which—since I am as old as the seas—I used to scoff at when they first showed up back in the day. What kind of loser can’t get their lazy ass off the couch to change the channel, I yelled at the sky. What kind of decadent bastard wants this I yelled, shaking my fist at the sky.

Turns out I did, as did everybody who ever got their mitts on one.

It’s obviously not a hardship in any meaningful way to stick a cable into your phone to charge it—it’s preposterous to pretend otherwise. But QI charging is just that tiny little bit less frictionless, that little bit more sci-fi.

And yes, I know Android had it first. Thank you for the reminder.

I’m not about to switch platforms and ecosystems and find app replacements and purchasing my apps again just to be able to lay my phone upon a puck, no matter how magical it is.

Here’s where we talk about how Apple gets me every year: Better cameras. Before the keynote, I am steady in my resolve. I do not need to update. The phone I currently have is great. I shall not be swayed and keep giving them all my money.

Apple, during keynote: “New iPhone has a much better camera.”

And iPhone X has fantastic cameras. So much better than previous generations. As is, amazingly, par for the course.

The last thing, which is a smaller thing and not a reason to upgrade by itself, at least for me, is that Apple keeps defying physics with the speakers. Every generation they get a little bit better and louder. Physics being physics, they’re not what anybody would call objectively good but they are indeed better and louder.

They’re not good enough that I’m not going to go Bluetooth to a speaker to listen to podcasts in the morning, but they are getting there. In an incredibly small physical package.

This is why iPhone X feels so substantial—even if the most of the weight is battery, you know there’s so much technology brought back from the edge in there, it’s touching, in a weird way.

The amount of software engineering, materials science, and manufacturing prowess evidenced by iPhone X—and the other flagship phones from other manufacturers—is almost humbling. We, as a species, can build this. Or, we can argue about whose holy text is the correct one and murder the ones we don’t agree with.

If you’re a technology enthusiast, iPhone X will make you very happy indeed.

If you’re a normal human, you can wait and spend the money on something else that makes your life better, knowing this kind of technology is coming to us all as time marches on.

It really did take courage to release something like this and break with so many traditions. So kudos, Apple.