Nic finds that Vibram FiveFingers help with his chronic compartment syndrome. This makes him happy. 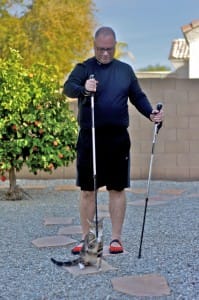 I’ve suffered from chronic compartment syndrome in my lower legs since I was about 16. (I ran my first half marathon when I was 13, and ran long distance at least five days a week from the time I was 11.) Not a horrible case, but enough that I can’t run or walk fast without experiencing pain in my shins—a throbbing, wet kind of deep pain that usually lasts a couple of days after exercise.

Which is a huge suck since running is the only kind of exercise I really enjoy, especially trail running.

But that’s all been out since my early 20s after I gave up trying to run through the pain. Which in retrospect was—of course—the stupidest thing I could possibly have done.

Once I became aware of the barefoot running trend and the Vibram FiveFingers, I thought it made sense. As a matter of fact, the entire Primal movement led by Mark Sisson makes all kinds of sense.

We need to stop fighting millions of years of evolution and embrace it instead.

So I bought a pair of FiveFingers and started wearing them a year or so ago, not just in the vain hope it would help with the compartment syndrome, but also to allow my body to move more naturally.

Let me digress here by saying how impressed I am by the company’s marketing scheme—making the shoes in the most obnoxious colors possible ensures people notice them and ask about them. My hat is off to the devious bastard who thought of that. My first pair was Sprints. Fire engine red, because that was the only color in stock.

Now, the first couple of hours wearing FiveFingers are weird, with your feet knowing you’re barefoot, but your brain saying, “No! We are at the grocery store! Clearly we must be wearing shoes!” But after a while the brain accepts reality.

Once you get used to them, you start walking like you evolved to walk, not fighting the way your body is built. That’s huge.

I tried to run in them a few times after I first got them, and the shin pain seemed to take a bit longer to start, but once it did it was actually more debilitating than before. That was disheartening.

The last several months I’ve started Nordic Walking. Great exercise. Not as fun as running, but not as boring as regular walking. And I’ve been doing it in my FiveFingers. With no sign of compartment syndrome. None.

But the drawback of Nordic Walking in FiveFingers is it tears up the feet something ridiculous—I’m developing huge calluses on the pads of the feet and the heels have lost a lot of skin. So last weekend, without thinking, I decided to wear running shoes on the walk to keep my feet from getting sore.

The day after the walk my shins were in agony and still are, three days later.

This despite my trying as much as possible to walk the same way as barefoot, landing on the whole foot instead of the heel.

Not being a physician, all I can think is it’s the act of lifting and clenching the toes when walking that makes all the difference.

If you have chronic compartment syndrome, I highly recommend giving the FiveFingers a shot. What do you have to lose?

And if you’re just a regular human with feet, I recommend them highly as well.

« Twitter is not your free advertising
Something in the water: 10 years of the Apple Store »