Nic takes his daughter to go nerd watching at the Phoenix ComiCon. 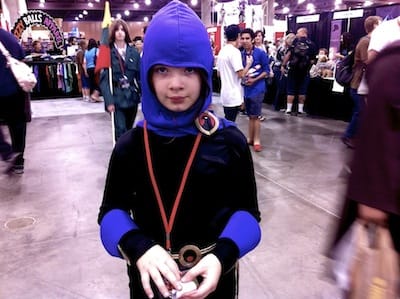 Andrea in her Raven costume at Phoenix ComiCon.
Click for larger version.

For the first time ever, I decided to attend a ComiCon and to bring my daughter. An inveterate over-thinker, my main reason for attending and bringing Andrea was to get her used to seeing “different” people and to, if not embrace their weirdness, have it in the back of her mind that people are different and that’s OK. It’s really important for me to raise a new citizen who is comfortable with letting people be themselves.

We’ll see how it all works out.

So yesterday was the day. Phoenix ComiCon. Andrea’s first immersion—or descent, if you like—into nerd culture. She wore her Raven from Teen Titans costume, since that show means a lot to her. Like any sane kid, she would really love to wear a cape like they do in the shows. How can you argue with that? I’d freaking love a flowing cape.

We walk in to the main exhibition area and immediately Andrea shuts down. It’s just too much. It should be noted here that we’re not the kind of people who take our daughter to a whole lot of events, so this was a huge first for her. I’m impressed with how well she handled a huge hall full of weirdos exhibiting strange things with even stranger people in costumes shuffling around taking up every square foot of space. But it was hard work for her. 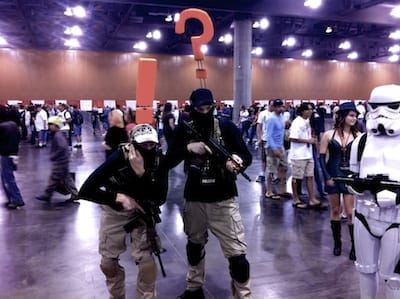 The funniest costumes at Phoenix ComiCon as far as I’m concerned.
Click for larger version.

So what was the con like? An impressively well-run affair with a metric boat-load of people. The organizers deserve a lot of kudos for making the trains run on time.

Like the Renaissance Faire, it’s interesting how nerditry is not as a rule a sub-culture that attracts the attractive people. A lot of people at the con could really benefit from maybe taking a good, long walk and cutting down on the carbs a bit. The beer gut does lessen the authenticity of your Bobba Fett costume, it really does.

So let’s take a look at some of the diffent tribes occupying the Con.

First off, of course, the steampunks. This is one subculture I just can’t get into. I’ve tried. I really don’t know why it grates at me. (But do please watch the video down below.)

Yes, yes, you have round brass goggles and you’re wearing leather and you’re chubby. Splendid.

Next, the anime cosplay people. You know, just rock on. Do your thing. Not being into anime myself, I had no idea who anybody was supposed to be. Which doesn’t matter: As long as you put some effort into your costume, I’m all for it. Rock on with your pink wig and spandex uniform. Just keep it real, for whatever value of real you’re operating on.

And then, cue Beethoven’s Fifth, there’s the Star Wars nerds.

As a man of a certain age who was incredibly influenced by Star Wars when it was first released, I feel uncannily in touch with the Star Wars nerds. Which makes me angry. Let me explain. You’re celebrating this movie series, dressing up, building costumes, really getting into it, and it turns out that the guy who created the universe you’re celebrating really doesn’t give a flying goddam about it—Lucas is busy selling Happy Meal toys and inventing Jar-Jar Mother-Effing Binks.

Which is a kick in the nuts and made me say, “OK. That’s how you want to roll, that’s fine, it’s your universe, but I’m done with this, you money-grubbing hack.”

But you don’t care. “I’ll keep working on my stormtrooper helmet.” And obviously, hey, rock on. Whatever keeps you from sucking on an exhaust pipe. You know Lucas has sold your ass down the river to the nearest McDonalds and you don’t care.

To the Star Wars nerds’ credit, I saw only one slave girl Leiah, and she pulled it off. Thumbs way, way up! For a man—as previously discussed—of a certain age, slave girl Leiah is very special and the sexiness needs to be respected.

So, Phoenix ComiCon was a good time. Extremely well organized and put together, and with a wide enough focus that any kind of nerd in the Phoenix area should check it out.

If you’re not a nerd, I still recommend it. See how the other 0.2 percent live. You positively can not find better people-watching anywhere in town.

As a bonus, here’s the inimitable Merlin Mann riffing on steampunk (NSFW—language):