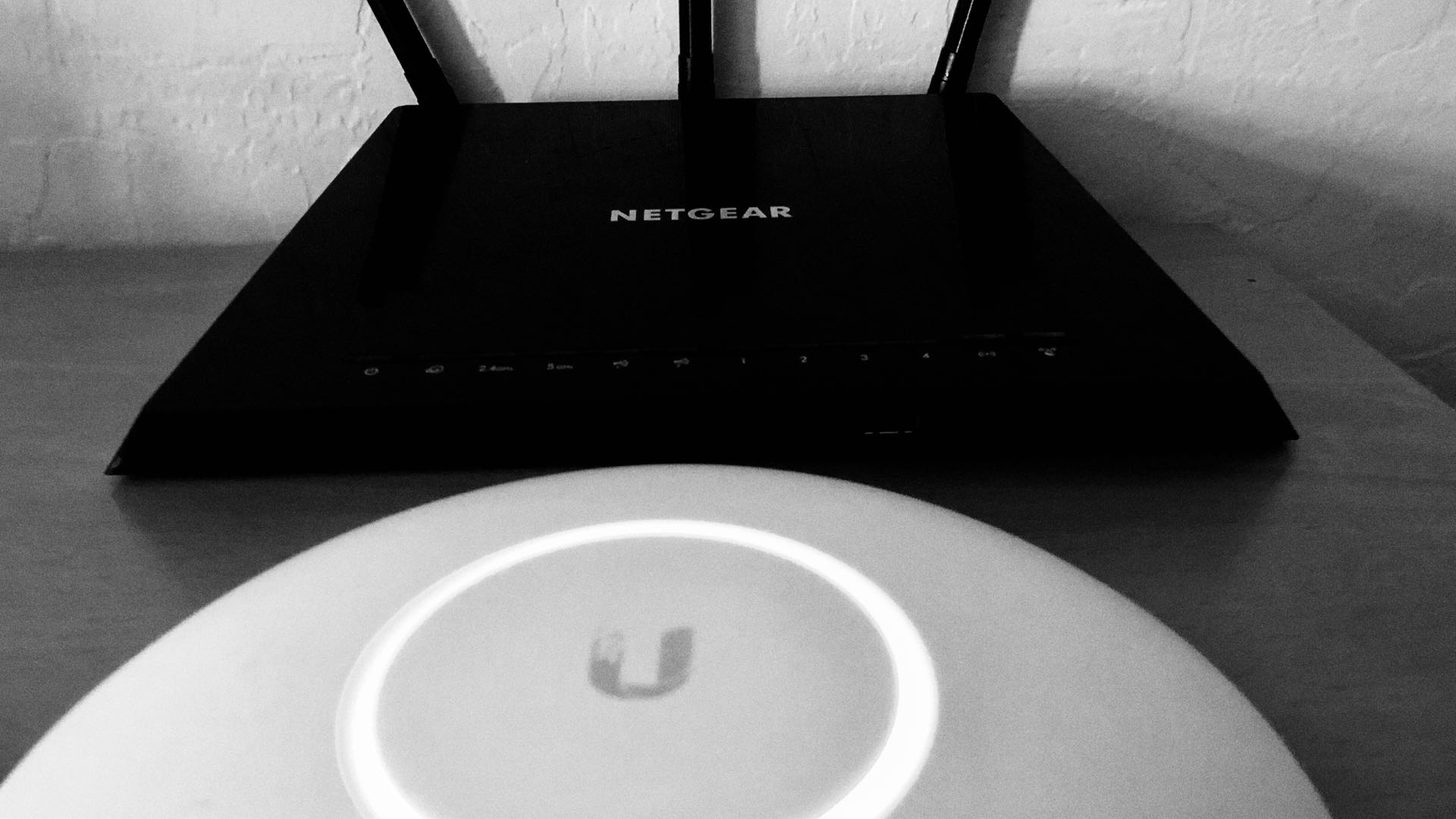 Every once in a while you have to renew your nerd card. It’s the law. Seriously, look it up. So to renew mine I went the utterly predictable route and updated my home WiFi to a Ubiquiti UniFi setup.

This was prompted partly by daughter—intergalactic destroyer of bandwidth—complaining about the existing WiFi sometimes flaking and by a need, a need to nerd.

For the last several years WiFi in the household has been provided by a Netgear R6400 hacked with a Kong build of DD-WRT.

That’s right: WiFi and routing in my home has been provided by a consumer device I patched to run software from the Internet provided by an individual or group that goes by the moniker Kong. For me, that felt satisfyingly cyberpunk. Which it probably doesn’t for anybody sane.

When looking into alternatives, I of course came across the infamous Ars Technica article about Ubiquiti UniFi. Which you should read if you haven’t. It really captures the nerd yearning.

After I was triggered by the Ars Technica article, the traditional nerd obsessive Internet search-and-read began, and after that also proved positive, I pulled the trigger and the devices winged their way here.

Casa Core Dump is now irradiated by a UAP-AC-PRO access point, and routing is performed by a Unifi Security Gateway.

Yes, only one access point. Casa Core Dump is a 1,900 square foot house and the UAP-AC-PRO beams hard. I’ll probably add another to flood the backyard with WiFi when the weather cools down.

And things are going well. In the two months the router and access point have been here, they have been rock solid.

Let’s enhance that one: They have been rock solid. The devices have, so far, been sheer plumbing: They sit there and do what they’re supposed to without calling attention to themselves. Which is exactly what I wanted when I bought them.

But nothing is perfect, so if you’re planning on making the jump, note that your adventure only begins when you install the equipment. With flexibility and features comes a period of tweaking as you settle the devices down.

Your setup is not my setup, and you’re not replacing what I’m replacing, and you’re not using your network the same way I use mine, so you’ll see different issues. But wireless being what it is, there will be overlap, so here are the major issues I found and how I resolved them.

First issue: AirPlay would disconnect randomly. Which, yes, is something AirPlay is famous for doing. But it was solid with DD-WRT on murderbot. Ugh?

After some experimentation, turning down the 2.4 GHz radio signal strength seems to have made AirPlay behave. AirPlay being AirPlay, your experience may differ.

Second issue: Spotify on the iPhone could no longer find my ChromeCasts, even after enabling multicast DNS. Turns out the ChromeCasts needed to be rebooted.

Did you turn it off and turn it on again.gif

And judging from forum posts around the Internet, the controller sometimes does not upgrade gracefully at all. Which, if you want to be charitable, I guess you could look at as being a bonus Enterprise IT Admin Simulator™.

There are also some surprising oversights in the controller software. For instance, there’s no way to get month-by-month bandwidth graphs. It just shows bandwidth since the controller was started. A major oversight since we’re now living with bandwidth caps in America.

Yes, America: Bandwidth caps, ISP monopolies, and no net neutrality. Let’s give ourselves a hand, everybody!

Another strange oversight is that you have to leave the glossy goodness of the controller and use your SSH-fu to run an inbound OpenVPN server on the thing. It’s apparently on Ubiquiti’s roadmap to expose OpenVPN in the controller software, but it’s not here yet.

Executive summary: I’m impressed with my Ubiqiti UniFi gear, though there are some odd oversights I hope they rectify soon.

If you’re the kind of person who enjoys fancy dashboards, slick GUIs, has the patience and skill for the occasional “enterprise” type difficulty, and wants rock solid Internet in your home or office, I recommend Ubiquiti gear.

NOTE: Some links are Amazon affiliate links. If you purchase something through them I get a tiny kickback, which is greatly appreciated and doesn’t add anything to your cost.